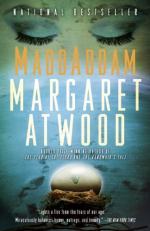 Margaret Atwood
This Study Guide consists of approximately 56 pages of chapter summaries, quotes, character analysis, themes, and more - everything you need to sharpen your knowledge of MaddAddam.

This detailed literature summary also contains Quotes and a Free Quiz on MaddAddam by Margaret Atwood.

The following version of this book was used to create this study guide: Atwood, Margaret. MaddAddam. Nan A. Talese/Doubleday Publishing, 2013. Print.

MaddAddam begins with a summary of the prior two books, Oryx and Crake and The Year of the Flood, which also takes place in the same near-dystopian future. MaddAddam tells the story of Toby, a woman who lives with the remaining humans after a plague has wiped out the majority of the human race.

In the first section, Toby and Ren, another member of the last few human beings, search for Amanda, a woman who had been kidnapped and raped by two men known as Painballers. These Painballers would compete in gladiator-like arenas for the entertainment of the elite corporate class prior to the fall of humankind. While we assume Amanda has been raped, Toby and Ren find her alive and she is successfully retrieved from the Painballers. Meanwhile, a group of Crakers, which are human-like creatures bioengineered by a man named Crake, join the human encampment. When Toby and Ren return with Amanda to the cobb-house, the Crakers begin their mating season. Two Craker men force themselves onto Amanda and Ren, which Toby later describes as a "cultural misunderstanding" (216).

During their rescue mission, Toby and Ren rescued Jimmy, who was the prophet of the Crakers while Crake and Oryx were alive. Since Jimmy has been injured, he cannot fulfill his duty as a prophet. Therefore, Toby steps in and begins to tell the Crakers stories about the world in chaos, which is the term referred to the time prior to the fall of humankind. Prior to this Zeb, Toby’s lover, returns from a long absence. As their relationship develops, Toby tells the Crakers the entire story of Zeb. As Toby tells the Crakers tales of Zeb’s life, the truth of the plague that killed humankind unfolds. The reader learns that the pills that caused the plague were made in a facility called HelthWyzer, and Toby's mentor Pilar was responsible for protecting the pills. The pills were then given to Zeb to be smuggled from HelthWyzer and kept safe from the surveillance of the CorpsSeCorps, the group of the higher-ups who strictly monitored the daily lives of human beings during the chaos. Zeb hid the pills in a bishop piece of a chess set. Once Pilar died, she gifted a chess set with the bishop piece to a young boy named Glenn, whom Zeb had befriended during his time at HelthWyzer. Glenn would later become Crake, and the reader learns that Crake was the one who created the Paradice Dome project where he would kidnapped several intellectual minds in order to mass produce and distribute these drugs to the human population. Crake caused the mass plague that killed the majority of humankind because he wished to rid the world of jealousy, hatred, and other useless emotions. He wanted to save human beings from themselves, and the remaining human beings living in the encampment with Toby were a part of this project, who were called the MaddAddamites.

In addition to the MaddAddamites, Zeb’s stories reveal more about the Gardeners, which was a religious group of individuals created during the chaos. The Gardeners sought to restore human interaction with nature and to value science as produced in nature rather than in labs deprived of a natural process. Our protagonist Toby was a member of this group. This group began with Adam, known as "Adam One" to the Gardeners. As Toby tells the Crakers Zeb’s stories, we learn that Adam is Zeb’s brother, and Adam is missing throughout the majority of the book.

As we follow Zeb's adventures and learn of his connections to the key players who caused the situation they currently live in, we also follow Toby’s day-to-day life and the struggles that the MaddAddamites face. The MaddAddamites constantly discuss food and how to make certain foods from the resources surrounding them. In addition to the Painballers threatening them, the members of the human encampment fear the Pigoons, an animal hybrid borne of the Paradice project. Pigoons are hyperintelligent pigs with their own cultures and languages, and they were made by mapping the human prefrontal cortex brain tissue onto pigs’ brains. Amongst the Crakers, Blackbeard, a young Craker boy, takes a liking to Toby. Toby teaches him how to write and how to find meaning in writing, and Blackbeard becomes a translator for the MaddAddamites and the Pigoons.

The Painballers who attacked Amanda threaten the MaddAddamites by leaving them a Pigoon piglet that they had tortured and killed. The MaddAddamites and the Pigoons form an alliance against the Painballers, and the Pigoons tell Toby that the Painballers are heading towards the remains of the Paradice Dome in order to rob the weapons hold. The group moves to the AnooYoo Spa for better protection from the Painballers and also easier access to the Paradice Dome. The Pigoons work with the MaddAddamites to protect the Crakers before the battle to come. The following day, Toby and company, Blackbeard, and the strongest Pigoons breach Paradice in order to kill the Painballers, thereby fulfilling their pact with the Pigoons. Blackbeard tells the tale of the battle through his perspective. Blackbeard tells the other Crakers that the group had found Adam, Zeb’s brother. They attempted to save Adam, but he perished in the battle. Toby and Zeb managed to disable the Painballers and return them to camp in order to have a trial, but Jimmy also died sacrificing himself. They buried Adam and Jimmy, and other members were able to collect the remains of their dead loved ones from the time of the chaos and give them proper burials.

In the aftermath of the battle, Swift Fox, Ren, and Amanda found out that they were pregnant with part-Craker children, and they had their babies, continuing the human race in some capacity. Toby and Zeb marry one another, and Toby fully embraces her role as the new prophet of the Crakers. She teaches the new human-Craker hybrids how to write like Blackbeard, and they continue the tradition of telling stories. In the end, Zeb dies on a scouting mission, and Toby ends her life by disappearing into the forest and poisoning herself with mushrooms. MaddAddam ends with Blackbeard as a young man telling the new generation of Craker children these final stories.

More summaries and resources for teaching or studying MaddAddam.