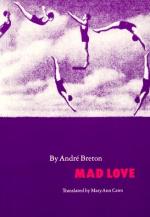 André Breton
This Study Guide consists of approximately 22 pages of chapter summaries, quotes, character analysis, themes, and more - everything you need to sharpen your knowledge of Mad Love.

This detailed literature summary also contains Topics for Discussion and a Free Quiz on Mad Love by André Breton.

Mad Love (L'Amour fou) is surrealist theorist André Breton's case study on love. Using the surrealist style of juxtaposition, Breton explores how love is manifested and expressed in his poetry, in found objects, with his relationships with women, mostly notably with artist Jacqueline Lamba, and in the final chapter, in regards to his relationship with and hopes for the future of his infant daughter.

Best known as the founder of surrealism and its primary theorist, André Breton was also a poet. Published in 1937, Mad Love is partly an ars poetica and partly an autobiographical exploration of Breton's relationship with the artist Jacqueline Lamba. Mad Love was published nine years after the publication of one of Breton's most famous works, Nadja a semi-autobiographical exploration of Breton's interactions and obsessions with a young, mentally-unbalanced woman. Like Nadja, Mad Love provides Breton an opportunity to explore surrealist theory and important surrealist themes, including the power of desire and the unconscious and their relation to delirium, poetry, and love.

Breton's arguments about love and poetry in Mad Love do not develop logically or move linearly. As a surrealist text, instead the connections that Breton makes between ideas, and between the different sections of the book, are dictated by what some would call "chance" or "circumstantial-magical" connections, but that Breton sees as tied to the unconscious. Contending that "chance is the form making manifest the exterior necessity which trades its path in the human unconscious," Breton explores how the circumstances that led to his discovery of love, of Lamba, of found objects in the flea market, of phrases and inspiration for his poetry are dictated by desire and by delirium.

Mad Love contains seven sections. Each explores the themes of love and desire through a slightly different lens. Mad Love begins by retracing some of the ideas about love and beauty explored by other avant-garde poets and playwrights, including Alfred Jarry, Comte de Lautréamont and Mallarmé, before turning to expressly surrealist theories and practices, most notably automatism and the found object. The book also includes a number of photographs by surrealist artists. All these references make Mad Love a survey, of sorts, of French literary history and of the theorists that influenced the surrealists. Although the book is largely a reflection on Breton's relationship with Lamba, Breton does not describe his first sighting of her until Section 4, approximately one third of the way into the text. It is not possible to separate the "madness" from the "love," in Mad Love. They are intertwined and as a followup to Nadja, the text in which Breton explores a relationship with a woman who was insane, the love that Breton describes in Mad Love still has that idea of delirium and frenzy. The texts describes both the highs and lows stirred up by this "mad love," from the excitement of first meeting Lamba to doubts about their future. The book ends with a section where Breton addresses his infant daughter (his only child and his child with Lamba) and wishes her a future where she too is "madly loved" (pg. 119.)

More summaries and resources for teaching or studying Mad Love.