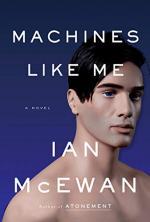 Ian McEwan
This Study Guide consists of approximately 40 pages of chapter summaries, quotes, character analysis, themes, and more - everything you need to sharpen your knowledge of Machines Like Me.

Machines Like Me Summary & Study Guide includes comprehensive information and analysis to help you understand the book. This study guide contains the following sections:

This detailed literature summary also contains Quotes and a Free Quiz on Machines Like Me by Ian McEwan.

The following version of this book was used to create the guide: McEwan, Ian. Machines Like Me. Nan A. Talese/Doubleday, 2019.

In Machines Like Me, Charlie Friend uses the money he inherits after his mother's death to buy the newest model of the artificial human, Adam. When Adam arrives at the apartment, Charlie and his upstairs neighbor, Miranda Blacke, carry him in on a stretcher, plug him in, and wait for him to come to life. After Miranda retreats to her doctoral studies and while Adam charges, Charlie considers how he should program Adam's personality. Realizing he is in love with Miranda, he decides if they program him together Adam can be like their child.

Once Adam awakens, Charlie attempts to adjust to his presence. He feels Adam is both markedly lifelike, yet distinctly nonhuman. That night, just before Miranda comes over for dinner, Adam tells Charlie not to trust her as she is a liar. He says he found court records involving her and warns Charlie against becoming further involved. Though unsettled, Charlie ignores Adam. After they sleep together that night, the two begin a love affair. As their relationship progresses, Charlie grows both more attached to and increasingly frustrated with Miranda. She never seems to be vulnerable around him, which Charlie believes is evidence that she is hiding something.

One night the two get into a political debate in which Charlie accuses Miranda of being heartless. Furious, Miranda invites Adam upstairs to charge in her apartment. Charlie listens in horror below as the two have sex. In the morning he is outraged. Miranda argues that sleeping with Adam does not count as cheating, because he is a machine. She tells Charlie she only did it to see what it would be like. Charlie argues that Adam has feelings and thoughts and so he is right to be hurt. The argument lacks resolution, so as a means of quieting Miranda, Charlie brings up the court case which alarms Miranda. Though she refuses to reveal the details, she does tell him that the man involved, Peter Gorringe, is due to be released from prison.

After Miranda leaves, Charlie and Adam get into a conversation which goes poorly. Charlie attempts turning Adam off, but Adam reaches around and breaks Charlie's wrist. Afterwards, Miranda realigns herself with Charlie and their romance seems renewed. Afraid of upsetting their newfound intimacy, Charlie does not press Miranda about the case. Instead he researches Peter Gorringe independently, and discovers that in college, Miranda showed up at his apartment with a bottle of vodka, and later accused him of raping her. Though Gorringe pleaded innocent, he was still convicted and imprisoned.

Worried about what else Adam might do, Charlie and Miranda schedule a visit from the engineer. She performs a series of tests on him which prove nothing. Feeling anxious afterwards, Charlie abruptly asks Miranda if Gorringe actually raped her. She confesses that he did not, but that he did attack and rape her childhood friend Mariam. Per Mariam's request, Miranda never told Mariam's parents about the incident, nor confronted Gorringe. A few years later, however, Mariam killed herself. Miranda then invented the scheme to accuse Gorringe of raping her in order to avenge her friend's death. She then tells Charlie and Adam that she received a message through Gorringe's cellmate that upon his release, Gorringe plans to kill her.

When time goes by and Gorringe fails to surface, Adam suggests they all pay him a visit together. Charlie does not support the plan, but Miranda believes telling him the real reason he went to prison will grant her peace. Meanwhile, Miranda is also preoccupied by visiting a young boy, Mark, who she hopes to foster and adopt. Simultaneously, Adam takes over Charlie's work buying and selling stocks, making them an impressive amount of money. Charlie and Miranda decide to buy a new house together with the funds.

The three then travel to Salisbury and arrive at Gorringe's. While there Miranda explains her motivations for accusing Gorringe and demands he confess to raping Mariam. Adam records the whole thing. In the weeks that follow, Adam works tirelessly on transcribing the confession. Charlie begs him to edit out Miranda's portion of the story so she does not get arrested for lying to the court. Meanwhile he and Miranda host Mark more frequently, and apply for adoption.

One day, however, Adam goes out for a lengthy walk. Upon his return, Miranda has a hunch that they should check their money box. Her suspicions are correct: Adam has taken all of the money and admits to giving it away. He also tells them that he reported Miranda to the police, believing she is as guilty as Gorringe. Charlie and Miranda panic. Without the money they cannot buy the house, and if Miranda goes to prison, they will be unable to adopt. Charlie then grabs a hammer and smashes Adam over the head.

Miranda does indeed go to prison for six months. During her time, Charlie keeps visiting Mark. When she gets out, she begs him to remove Adam's body from the apartment closet. Charlie finally delivers him to Alan Turing, his inventor, per Adam's dying wish. Turing is furious for what Charlie did, telling him he committed a serious crime against a sentient being. Charlie realizes how foolish he has been. On his way home he gets a text from Miranda announcing their adoption application's approval.

More summaries and resources for teaching or studying Machines Like Me.

Machines Like Me from BookRags. (c)2022 BookRags, Inc. All rights reserved.