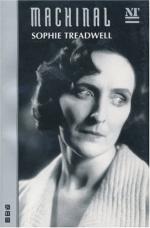 Sophie Treadwell
This Study Guide consists of approximately 22 pages of chapter summaries, quotes, character analysis, themes, and more - everything you need to sharpen your knowledge of Machinal.

The Yellow Wallpaper, written by Charlotte Perkins Gilman and first published in 1899, is a classic, haunting story about a trapped woman's mental disintegration, due largely to the oppressiveness of the society she lived in.

Plays (1987), by Susan Glaspell, is a collection of plays by the early twentieth-century female playwright and winner of the Pulitzer Prize for Drama in 1931. Her plays are unique, and she is known for her refusal to create stereotypical female characters.

Gringo (1922), by Sophie Treadwell, is a play that depicts and highlights the stereotypical prejudices that Mexicans and Americans have felt about each other.

Elmer Rice: Three Plays (1965) is a collection from a man often held in high regard as an influential playwright. He is often noted for bringing German expressionism into American theatre.

More summaries and resources for teaching or studying Machinal.

Machinal from Gale. ©2005-2006 Thomson Gale, a part of the Thomson Corporation. All rights reserved.