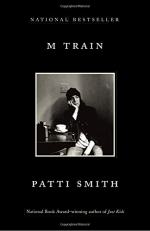 Patti Smith
This Study Guide consists of approximately 42 pages of chapter summaries, quotes, character analysis, themes, and more - everything you need to sharpen your knowledge of M Train.

The following version of this book was used to create this guide: Smith, Patti. M Train. Bloomsbury, 2015. Kindle edition.

In M Train, Patti Smith wanders between cafés and dreams, books and countries. She tells of several years of her life from roughly 2010 to 2012. Smith begins with her first dream of the cowpoke, an old man philosophizing in the middle of the desert. Then she goes on to describe her routine at Café ‘Ino, across the street from her home in New York. She drinks black coffee and eats brown bread with olive oil for breakfast. For lunch, she sometimes has bean soup and the coffee continues all day long. She thinks back on a trip to South America because Zak mentions beach cafés.

The author explains that, caught up in fond feelings for things in her past, she slipped into a phase of melancholia and isolated herself during the holidays. Her primary focus is writing, in the café and in her bed. She receives a letter from the Continental Drift Club, which she had encountered coincidentally. It meets in remembrance of a pioneer of the continental drift theory, Alfred Wegener. She has been made a member and invited to give a speech. Smith loves to watch crime shows, identifying strongly with the characters. Her speech at the CDC does not go as she intended, but she enjoys her time in Berlin. She visits the zoo and spends time in a retro-Russian-themed café. On her way back, she spontaneously decides to stay in London for a few days, watches detective shows for hours, and reads Ibsen’s plays in a hotel.

Back in New York, Smith feels bogged down. She thinks back on inspiring conversations with William Burroughs and rifles through her bookshelves. The cowpoke tells her in a dream that if she does not have a valentine, then everyone is her valentine. She remembers thinking for days as a child about a passage in a book. In the passage, a father said that his son would not amount to a hill of beans, and Smith tried to figure out how much a hill of beans is worth. A few days later, she is thinking about her time in Detroit with her late husband Fred Smith. They lived independent of time, and the clock in a diner bar that had no hands sticks in her mind as a symbol.

Smith becomes obsessed with a Japanese book, The Wind-Up Bird Chronicle. And she ponders how many kinds of masterpieces there are, torn between two and three. She receives a letter, asking her to visit Casa Azul, Frida Kahlo and Diego Rivera’s home. She had been to Mexico in her twenties to visit Veracruz, where she was told that she could find the best coffee in the world. She spent days in a small store, trying all the different kinds of beans. On her first day in Mexico City, she gets sick but goes to Casa Azul the next day. She photographs some of Kahlo and Rivera’s belongings that had been laid out for her by the museum director. She naps in Rivera’s bed, thinking of the butterflies a friend had put above Kahlo’s bed. And, feeling better, she speaks and sings to an audience of two hundred people.

In New York again, Smith visits Zak at his beach café in Rockaway. She falls in love with the boardwalk, atmosphere, and a small dilapidated house that is marked for sale. The author tells of fixing up an old wooden boat with Fred and sitting in it in their yard, listening to the radio. She decides to buy the house on Rockaway Beach and takes on many jobs for the summer to pay for it. In September, she buys the bungalow and names it Alamo. In late October, she feels a storm coming. She loses her Polaroid camera and is brought down by the upcoming anniversary of Fred’s death. The night of hurricane Sandy, she sits under her skylight and tries to distract herself by reading.

Smith loses her black coat which she wears almost every day in spring and fall. It was of sentimental importance to her and a part of her identity. Mourning her coat and eating lunch in a Japanese restaurant, she sees an island in her mind’s eye. She tries to draw it, leafs through her atlas, and decides to book a flight to Tokyo. She takes books by Dazai and Akutagawa with her, and she contacts her friends Ace and Dice to make plans together. She spends many days alone in her hotel room, writing and sometimes frustrated at being unable to write. With Ace and Dice, they visit graves and pay their respects to Japanese filmmakers and authors. She really enjoys her time with the two of them and they have several dinners that continue late into the night. On the way back, Smith thinks of the many times she visited Sylvia Plath’s grave. She took beautiful photos the first time but lost them, and then tried to recreate them on her next trips. She learns that Café ‘Ino is closing when she gets back home. On her last day there, she writes furiously for hours on end of all the great times she spent there.

An invitation to a reunion of post-Beat thinkers and artists in Tangier, Morocco arrives. It is Smith’s chance to finally deliver the stones from French Guiana to Genet’s grave. She meets old friends, enjoying many conversations and walks around the city together. They dance late into the night, visit a café that was a central part of a book by Mrabet, and drive to Larache to deliver the stones.

Renovations to her bungalow are underway after the hurricane, and Smith sits by the ocean remembering Fred’s funeral service. The story jumps to her watching Detective Linden on TV, finding out that it is the final episode of the show. Her deep disappointment causes her to reflect on how strongly she relates to the characters. A few days later, Smith tells of the Valley of the Lost Things. According to Fred, this is where all lost things go. Sometimes they call to their owners and can be found again. Smith reflects that creativity lies between life and belief. She says she sometimes believes in nothing, and sometimes in everything. The café in the desert had been painted and turned into a travel agency, and the cowpoke left without a trace. She plans to write about her coat and a café in her dream.

More summaries and resources for teaching or studying M Train.