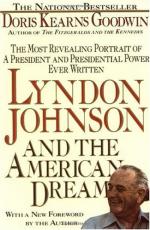 This detailed literature summary also contains Topics for Discussion and a Free Quiz on Lyndon Johnson and the American Dream by Doris Kearns Goodwin.

Doris Goodwin provides an insightful, intimate look at the private Lyndon Johnson that the public never knew. From his meteoric rise to power and the presidency, the reader gains full understanding of this complicated, driven figure of twentieth century politics and the almost Shakespearian-like fatal flaws which lead to his downfall.

Born into a family in which husband and wife shared exponentially different views and values, Lyndon Johnson grew up in small-town Texas, consistently torn between the cultured civility of his mother and the "down-home good 'ole boy", drinking, and sometime politician father. He grew up on the banks of the Perdernales River and in the small town of Johnson City, where he completed his rather mediocre high school education.

A two-year stint in California, during which he came to know poverty and the challenges faced by the unskilled poor, led the young Johnson into college and an eventual career in politics. The strategies and behaviors which led to political success were honed in college with subversive takeovers of student organizations, and fine-tuned during the Roosevelt and Truman administrations as a legislative assistant, Director of a New Deal program in Texas, and, finally as an elected official from his district. Johnson served in both the House of Representatives and the Senate before becoming vice-president under John Kennedy and then, with the assassination in 1963, president.

Johnson's personality and basic views of human nature drove his every political action. Unequaled energy coupled with the compelling drive to control every aspect of governmental institutions and to avoid controversy at all costs led Johnson into ultimate positions of secrecy and manipulation which worked so long as he could maintain that control. When he could no longer maintain complete control, Johnson's empire crumbled. A child of the New Deal and post World War II era, Johnson's views of the world were rather simplistic. All humans only wanted the freedom of democracy, the fulfillment of all basic necessities, and the hope of a better future. Johnson, as the paternalistic leader of the most powerful nation in the world, could bring this about. From his Great Society at home to the proliferation of democratic ideals throughout the world, Johnson knew what was best for every human soul. Containment of a unified Communist threat drove foreign policy long after the Communist world had splintered and led to the disastrous involvement and escalation of the Vietnam War. Great Society programs, unmanageable and thus doomed to failure, resulted in unfulfilled promises to the poor and minorities.

The fall of Lyndon Johnson and his Great Society was swift and complete once the truth about the war and the failure of most domestic programs were revealed. Coupled with out-of-control inflation, Johnson saw no way out other than retirement from public life. Announcing his intention not to seek re-election in 1968, Johnson retired to his ranch, the one small piece of America over which he still had control. He managed it as if it were a country of its own, and died with his Great Society in 1973.

Though history has not been kind to Lyndon Johnson, the aftermath of his "reign" has resulted in a more assertive and active Congress, which certainly felt the sting of having acquiesced so completely to a power-grabbing executive. Still not the force it once was, Congress continues to grapple with the role it should play in checking the decisions and actions of the Executive branch.