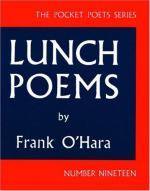 Frank O'Hara
This Study Guide consists of approximately 21 pages of chapter summaries, quotes, character analysis, themes, and more - everything you need to sharpen your knowledge of Lunch Poems.

This detailed literature summary also contains Topics for Discussion and a Free Quiz on Lunch Poems by Frank O'Hara.

Frank O'Haraappears in All poems

Lunch Poems is a collection of autobiographical poems, and as such the poet Frank O'Hara is its protagonist. All poems are told in the first person from O'Hara's point of view. His words reflect his sensibilities.

O'Hara was born and grew up in Baltimore. In Galanta, he describes his relationship with Sally, with whom he had his first sexual experience. Little is revealed about the period between then and the time of the first poem, when O'Hara is in his mid-thirties. In this time, however, the poet has discovered his homosexuality.

Frank O'Hara lives in Greenwich Village during the period of the collection (1953-1964). He is part of a coterie of artists, writers, and intellectuals that includes the playwright LeRoi Jones. O'Hara is a neurotic who detests the inanity of modern life and worries that he is a failure. In For the Chinese New Year & For Bill Berkson, he reveals that he expects the world to end soon.

Throughout Lunch Poems, O'Hara mentions many lovers, often associating them with the places he travels: Spain, Paris, Germany, Georgia, Japan, etc. Each trip seems to involve another tryst. In St. Paul and All That, the poet reveals a long-time partner, a dancer. The poem ends with the two separating because O'Hara refuses to leave New York.

A cynic who detests the bland consumerism of America capitalism, Frank O'Hara does take immense pleasure in small things: a sunny day, Billie Holliday, movies. More than anything, he enjoys a good lunch.

Alma is a dancer from Detroit, whose story O'Hara tells in four parts. When he introduces her she is dancing against a sky with several multicolored suns.

Alma performs at the Metropolitan Opera in New York City at one point, but after a time she returns to Detroit to open a jewelry shop. In Detroit, she becomes a mother and invents an arch-supporter. She thinks often of her dead father and his garden. Eventually, she dies, and the poet imagines at that moment a tremor shook Fordham, her alma mater.

Buddhaappears in Image of the Buddha Preaching

The satirical Buddha that O'Hara presents in Image of the Buddha preaching is making a speech in Essen, Germany. He begins by explaining that the modern German philosophers have much in common with Buddhist belief. Buddha goes on to call for the improvement of trade between Germany and England.

LeRoi Jones is an actor and playwright. He is a friend of Frank O'Hara's who joins him for lunch to discuss music, art, literature and the recent assault on Miles Davis. LeRoi Jones - who would change his name to Amiri Baraka - writes primarily on racial themes. He is still alive, writing and occasionally acting in film and onstage.

Gianni is Frank O'Hara's friend who accompanies him to the top of 515 Madison Avenue. The poet is depressed and enraged by the building, but he assumes Gianni's thoughts are elsewhere, on Rachmaninoff or Elizabeth Taylor.

Johnappears in A Little Travel Diary

John is Frank O'Hara's companion on his tour of Spain and France. He is unclear whether they are lovers or merely friends. John - in a euphoric fit - buys an absurd amount of clothes, which they have to cram in with them as they travel by train across the Spanish countryside.

Isadora is a friend of Frank O'Hara's that dances with him in Bayreuth, Germany. It is a particularly fond memory for him as Isadora tells him he danced wonderfully. She forbids O'Hara to dance with anyone else.

O'Hara's Unnamed Loverappears in St. Paul and All That

The Unnamed Lover of St. Paul and All That is the only man that the poet indicates has been a regular companion as opposed to a casual fling. He is definitely a dancer. The poem tells the story of this relationship's dissolution. The lover wants to move to St. Paul, Minnesota, but O'Hara is unwilling to leave New York. As a result, the two men disappear from each other's life.

Sally grew up in the same neighborhood of Baltimore as Frank O'Hara. In Galanta, the poet recalls the attic in which he and Sally - then barely pubescent - experimented with each other's young body. They dreamed of traveling to distant lands with each other. In the poem, O'Hara says he thinks of Sally often but knows nothing of her life.

Allen Ginsberg - that great beat poet of the body and soul - is ill of health in the last poem of the collection. O'Hara tells Ginsberg a story of Hollywood spy-craft and fixes his medicine in the poem. At the end, the poet asks Ginsberg if he is feeling better.

More summaries and resources for teaching or studying Lunch Poems.