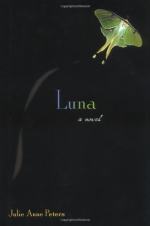 Julie Anne Peters
This Study Guide consists of approximately 48 pages of chapter summaries, quotes, character analysis, themes, and more - everything you need to sharpen your knowledge of Luna.

This detailed literature summary also contains Topics for Discussion and a Free Quiz on Luna by Julie Anne Peters.

"Luna" by Julie Anne Peters is a highly acclaimed novel about a transsexual teenager, his decision to transition, and the effects of this on his younger sister and sole confidante. When Liam confides that he wants to transition and become Luna all of the time, Regan struggles to keep his secret and help him become comfortable dressing in public, even as it negatively affects her own life and relationships. "Luna" is a touching and realistic portrayal of the challenges, triumphs and heartbreaks a young man must face in order to correct his destiny and become the girl he was born to be.

Though Luna wakes Regan in the middle of the night, dancing in her room, Regan loves Luna because she is her brother. Miserable as a boy, Liam wants to transition, but Regan is nervous about how people will see her because of her brother's differences. Regan develops a crush on her lab partner, Chris, and though she is upset when he drops the class, she is also relieved since she cannot afford to let him get too close and learn her secret. When Regan goes shopping with Luna, she is distraught by how Liam is treated when people realize he is a boy dressed in girls' clothing.

Liam covers Regan's babysitting job so that she can go on a disastrous date with Chris, but the Materas fire Regan when they come home to find Liam dressed in Mrs. Matera's negligee. Though Regan is furious with Liam for costing her her job, she cannot stay angry because of her need to protect him. Liam decides to tell his best friend, Aly, that he is really a girl, and he is distraught when Aly abandons him, though she is in love with him. Chris continues to pursue Regan, but right after she agrees to another date, Luna dresses at school, and embarrassed that Chris saw Luna, Regan rushes home, abandoning Luna to the harassments of the bully, Hoyt Doucet. While Regan feels guilty for betraying Luna in her time of need, Liam wakes Regan that night to thank her for forcing him to stand on his own.

On Liam's eighteenth birthday, Luna asks for her parents' blessing regarding her transition. Dad is appalled and insulting, while Mom walks out of the room, ignoring the situation. When Regan confronts Mom, she is furious to realize Mom has always known but never helped Liam. That afternoon, Aly visits with the intent of trying to accept Luna. Regan goes on her date with Chris but, distracted by leaving Luna home alone on her birthday, asks him to take her home early. Luna wakes Regan in the middle of the night to accompany her to the airport. She is going to Seattle to stay with Teri Lynn, a post-op transgender girl she met on line, and to begin surgical transitioning. Regan is sad because she does not want Luna to leave, but she wants her brother to be happy more than anything in the world. By leaving, Luna frees herself and also Regan who can now focus on herself instead of Liam or Luna.

More summaries and resources for teaching or studying Luna.