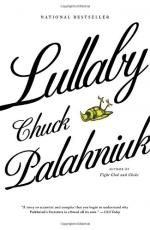 This detailed literature summary also contains Topics for Discussion and a Free Quiz on Lullaby by Chuck Palahniuk.

Lullaby is a novel by critically acclaimed writer Chuck Palahniuk. In this novel, Carl Streator, a journalist, is doing a story on crib death when he notices a strange connection between not only the deaths of these babies, but of his own wife and infant as well. As Streator continues to investigate a culling song he believes is responsible for all these deaths, he meets Helen Hoover Boyle, a real estate agent, who has also suffered and profited from this same culling song. Lullaby is a novel that questions the conformity of society and the media that appears to have the power to control the world's thoughts and desires.

Carl Streator is assigned a story that will profile the recent deaths of five infants and the impact their deaths have on their families. As part of the research for his articles, Streator rides along with a paramedic team to the scene of these deaths. At each home, Streator notices a book of poems called Poems and Rhymes from Around the World. This book is familiar to Streator because he can remember reading from the same book to his wife and child nearly twenty years before. At each home, Streator also notices that all the books are open to the same page, which is page twenty-seven.

Streator begins researching this poem and learns that it is a culling song or a song often sung to children during a famine or warriors injured on the battlefield. Streator also learns that Helen Hoover Boyle also lost a child twenty years ago from the same thing. Streator introduces himself to Helen and reaches out to her for help. However, Helen is reluctant to discuss this culling song with Streator. At the same time, Streator becomes aware that when he is angry or upset, he thinks of the culling song and the object of his rage suddenly dies right in front of him. Streator becomes afraid of his own thoughts and decides he must rid the world of every copy of the culling song.

Streator learns that Helen tracked down the author of Poems and Rhymes from Around the World years ago and bought up his estate in the hopes of finding the original copy of the culling song. Now Helen agrees to go with Streator to track down every copy of the book and find the original copy. Helen and Streator invite a young couple, Mona and Oyster, to travel with them. All of them have a different idea of what they might do with the original book in which the song appeared, the grimoire. Streator wants to destroy it, Helen wants to bring back her dead infant, and Oyster wants to rid the world of all people.

The foursome finds half the remaining Poems and Rhymes from Around the World, but still have no clue how to find the grimoire when a falling out between Helen and Oyster causes a parting of the ways. A short time later, Mona realizes that the appointment book Helen has carried with her for years is the grimoire, the spells written in various types of invisible writing. Streator and Helen decide to return home to give Helen a chance to translate the spells. This also gives Streator time to deal with a paramedic acquaintance of his who is using the culling spell to commit necrophilia with fashion models.

Helen translates all the spells, including one that allows her to take over other people's bodies. However, while Streator is in jail for the murders of all those he killed with the culling song, including his wife and child, Mona and Oyster steal the grimoire. Helen, fortunately enough, recalls the occupation spell and is able to move her consciousness into a grizzled old cop as her body dies from the suicide Oyster forced her body to commit while he occupied her body. Streator and Helen go off together in search of Mona and Oyster, hoping to stop them before they can do too much damage to the world.