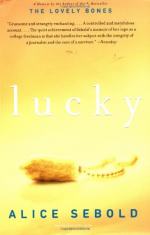 Alice Sebold
This Study Guide consists of approximately 26 pages of chapter summaries, quotes, character analysis, themes, and more - everything you need to sharpen your knowledge of Lucky.

This detailed literature summary also contains Topics for Discussion and a Free Quiz on Lucky by Alice Sebold.

Alice says she remembers the moments leading up to her rape, the rape, and the events after clearly. She is warned that he'll kill her if she screams, but she does so anyway. Her rapist knocks her down and tells her he has a knife. He uses her long hair to hold onto her. He knocks her down, bangs her head onto the ground, and she briefly loses consciousness. She says that she wakes staring into the eyes of the man who has the power to kill her and signs herself over to him, knowing she is about to die. She does everything he commands though she continues to tell him that she's a virgin and to beg for both her life and her virginity.

Over the coming months, Alice will have to defend herself against her father who believes she should never have allowed it to happen, against members of a grand jury, who ask if she didn't know she shouldn't be in the park alone at night, and against a legal system that eventually finds her rapist guilty as charged.

The rapist, Gregory Madison, is black, and Alice actually encounters him on a street near the university months after the rape. He has the self-confident look of a man who knows he got away with rape because Alice doesn't yell out to a nearby policeman. Instead, she walks on by, alerts the police and armed with the details of that nearby policeman, Madison is soon apprehended.

The prosecutors know that most rape victims can't deal with the strain of a trial, but Alice doesn't waver in her fight to see Gregory jailed. He is convicted in a court case, based largely on Alice's testimony and a match to a hair found on Alice the night of the rape. Alice takes the summer following the trial as an opportunity to reinvent herself with the help of her best friend, Lila. Then comes the night Alice returns home to find that Lila has been raped, and the attacker asked about Alice by name and committed the rape on Alice's bed. Lila doesn't follow through with the prosecution of her case, which is eventually put down to a revenge rape prompted by Madison from his jail cell. Lila cuts ties with Alice, seeming to blame her for not having had a broken window fixed.

Alice moves on, first to Houston where she drops out of school and develops a serious drug problem, then to New York where she continues to follow the destructive trends. She has a few successful articles and eventually sees her name touted in a book about post traumatic stress disorder and finally recognizes the signs of her own life for what they are. She next turns to California, seeking an escape from the harsh city life. There she eventually settles into her role as the survivor of a brutal rape and notes that "both hell and hope lie in the palm of my hand."

More summaries and resources for teaching or studying Lucky.