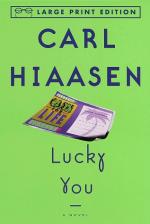 Carl Hiaasen
This Study Guide consists of approximately 30 pages of chapter summaries, quotes, character analysis, themes, and more - everything you need to sharpen your knowledge of Lucky You.

Lucky You: A Novel Summary & Study Guide includes comprehensive information and analysis to help you understand the book. This study guide contains the following sections:

This detailed literature summary also contains Topics for Discussion on Lucky You: A Novel by Carl Hiaasen.

Lucky You is a novel by bestselling writer Carl Hiassen. In this novel, JoLayne Lucks wins the lottery, only to have the ticket stolen by a couple of bumbling racists who cannot live with the idea of having to split the jackpot. JoLayne chases after the thieves, taking along her reporter Tom Krome who has his own list of personal problems following him around Florida. Lucky You is a comic novel filled with suspense and colorful characters that will charm and entertain both Hiassen fans and readers new to Hiassen's work.

JoLayne Lucks learns that she has won the lottery and is happy that she can now afford to buy Simmons Wood, a small parcel of land not far from her home where she likes to wander among the wild animals. However, JoLayne's ticket is stolen by a couple of bumbling racists who decided that winning half of a twenty-eight million dollar lottery is not good enough.

Tom Krome is a reporter who has been trying to divorce his wife for four years. Unfortunately, Krome's wife is determined to not become the first woman in her family to be divorced and she keeps hiding from the process server. At the same time, Krome has an affair with the religious wife of a local judge. When his lover decides that she must confess her sins, Krome's house is suddenly attacked and all the windows are broken.

Krome leaves town to interview JoLayne Lucks and finds her to be a charming, if private person. She decides that she would prefer to not allow him to write an article about her good fortune. However, during the night, JoLayne comes to Krome and tells him how two men broke into her house and forced her to give them her lottery ticket. JoLayne wants the ticket back but she does not want to go to the police for help.

Krome and JoLayne set off across Florida to find the thieves, using the charges the thieves make on JoLayne's stolen credit card to track them. JoLayne enlists the help of her friend Moffitt who is an ATF agent. Moffitt breaks into an apartments of one of the thieves, Bode Gazzer. He discovers that Bode is a white supremacist. Moffitt leaves a message on Bode's wall that sends him, his partner Chub, and follower Shiner on the run.

JoLayne and Krome follow Bode and his buddies into the Florida Keys where they camp on a deserted island. The men are met by their follower Shiner whom Chub sends to kidnap Amber, a Hooters' waitress that he has become obsessed with. As Chub attempts to rape Amber, Krome and JoLayne invade their camp and take back what is rightfully theirs. However, only Bode and Chub know that there are actually two lottery tickets. On her way back to Miami, Amber discovers the other lottery ticket hidden inside Chub's gun.

JoLayne and Krome leave Bode and Chub stranded on the deserted island and cash in their lottery ticket. JoLayne rushes home to put in a bid on Simmons Wood. When Moffitt learns that there is competition for the property, he gets information on the other buyer and blackmails him into backing off. At the same time, Amber learns that someone has proof that the lottery ticket belongs to JoLayne so she decides that it is time to give it back.

JoLayne gets Simmons Wood and finds the other lottery ticket in her mail. JoLayne gives the ticket to Krome, suggesting that it came from an anonymous source. Together Krome and JoLayne relax and enjoy becoming millionaires together.

More summaries and resources for teaching or studying Lucky You: A Novel.

Lucky You: A Novel from BookRags. (c)2022 BookRags, Inc. All rights reserved.