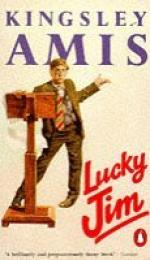 Kingsley Amis
This Study Guide consists of approximately 31 pages of chapter summaries, quotes, character analysis, themes, and more - everything you need to sharpen your knowledge of Lucky Jim.

This detailed literature summary also contains Topics for Discussion and a Free Quiz on Lucky Jim by Kingsley Amis.

Lucky Jim is one of the first novels by award winning writer, Kingsley Amis. In Lucky Jim, the protagonist is a young man who is fighting to keep a job he dislikes by attempting to charm a Professor he finds equally unpleasant. During his fight to keep his job, James Dixon falls in love with the girlfriend of his professor's son. It occurs to Dixon that he might not be doing himself any favors by courting this young woman, especially since he already has a girl he believes to be his girlfriend, but he discovers he cannot help himself. Soon Dixon finds he is unable to end the fight even as it leads him to sure dismissal. In the end the good guy does come in first. Lucky Jim is a humorous book that shows what a little persistence and honesty can achieve, even for the most common people in the world.

James Dixon goes to tea with his professor, a situation that brings him face to face with a girlfriend who has recently attempted suicide. Dixon is nervous about this meeting, but discovers that Margaret is more in control of her mental facilities that he had imagined she would be. Together they discuss the Welchs, the family of Dixon's professor and holder of his future. Dixon has agreed to attend an art weekend at the Welch home in hopes of scoring a few points with the professor as he finishes his first of two years probation with the local university. Dixon is sure the art weekend will be boring, but with some help from Margaret, hopes to be able to fake his way through the weekend successfully.

The weekend begins well. Dixon is able to hide the fact that he cannot read music in a group sing-a-long that ends just as Dixon is about to face a situation in which he cannot fake his way out. Dixon watches as the professor's son is introduced to the guests along with his girlfriend. Dixon skips this introduction in order to avoid the pompous son as long as possible. However, this decision leads to a disaster when Dixon mistakes the girl with the son as a ballet dancer he was told the son was dating. This leads to a fight that ends when Dixon escapes from the home to the pub down the street.

Dixon sneaks back into the house hours later, drunk and unable to control his passions for Margaret. Margaret rebuffs Dixon, sending him in search for more alcohol. When Dixon wakes the next morning from his drink induced slumber, he discovers that he fell asleep with a cigarette in his hand that burned a hole in the bed sheets as well as a table and a rug. Dixon is desperate to hide what he has done. Out of desperation, Dixon confides in Bertrand, the son's, girlfriend. Christine agrees to help him. They remake the bed and hide the table in a storage room, hoping this will hide the mistake long enough for Dixon to come up with a good excuse.

A few days later, Dixon takes a call meant for the professor and discovers that Christine is desperate to find Bertrand in order to arrange for him to meet her uncle, an art patron whom Bertrand would like to get a job with. Dixon discovers Bertrand is staying with his parents through a phone call in which he pretends to be a reporter from a newspaper wanting to interview Bertrand. Later, at a dance at the university, Dixon watches as Bertrand fawns all over Christine's uncle. Carol, the wife of a fellow history lecturer, takes Dixon to dance and confesses to him that she has been having an affair with Bertrand and is angry that Bertrand tossed her over for Christine. Dixon thinks he could use this news to lure Christine away from Bertrand, but decides not to.

Dixon offers Christine a ride home when she becomes unhappy at Bertrand's treatment of her. At the Welch home, Christine and Dixon confess that they admire one another and agree to meet for tea. Before their appointed meeting, Dixon attempts to end his relationship with Margaret, but becomes concerned about the impact of this on her and decides to rekindle the flame. At their meeting, Christine explains that she cannot end her relationship with Bertrand and that perhaps it would be best if they did not see one another again. A few days later, Dixon gives a scheduled lecture, but he is so drunk that he messes up. The following day, Christine's uncle offers Dixon the job that Bertrand wanted. At the same time, Dixon learns that Christine has learned of Bertrand's affair with Carol and left him. They decide to rekindle their love affair just as they both make plans to go to London.

More summaries and resources for teaching or studying Lucky Jim.

Lucky Jim from Gale. ©2005-2006 Thomson Gale, a part of the Thomson Corporation. All rights reserved.