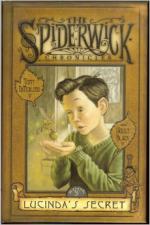 Holly Black
This Study Guide consists of approximately 31 pages of chapter summaries, quotes, character analysis, themes, and more - everything you need to sharpen your knowledge of Lucinda's Secret.

This detailed literature summary also contains Topics for Discussion and a Free Quiz on Lucinda's Secret by Holly Black.

Lucinda's Secret by Holly Black details the adventures of three siblings' in their quest to learn about and find a way to protect their family from the other "fantastical" world their Great-Great Uncle chronicles in a book.

Jared and Simon are twin brothers. Along with their older sister Mallory, they move into their family's old house in the country. Clues lead Jared to a book hidden in the house that was written by their Uncle Arthur from his firsthand knowledge of this other world. The book is called Arthur Spiderwick's Field Guide to the Fantastical World Around You and describes creatures that are mythological. The creatures of the Fantastical World want the knowledge contained in the book kept secret and some of them want the book to gain power from information about the other races in their world. All try to get the book by any means, including violence, which places the children and their family's lives in danger. Their mother is unaware of the children's adventures with the fantastical world.

A Brownie who is angry with the children, lives in the house and plays pranks on Jared. Mallory wants Jared to give the book to the fairies so that the creatures will stop trying to harm the family. Simon sides with his sister against his twin brother. Angry that they are ganging up against him, Jared points out that even if they give up the book, they are now aware of the fantastical world and that knowledge is unable to be removed from their minds. Their knowledge puts them in danger with or without the book. Also, their previous adventures lead them to hide an injured Griffin who all the siblings love and want to keep. All of this puts them in danger of losing their lives without the book as a bargaining tool.

In an attempt to learn more about the creatures and the books, the children visit their Great Aunt in an asylum. Her father wrote the book and they know she must have some knowledge of the fantastical world and hope she may have a solution that will keep their family and the book safe.

Their Aunt Lucinda is not insane and is fully aware of the fantastical world. She fears for the children's safety and tells them to convince their mom of the danger and flee the area. Lucinda explains that the book is dangerous and it is good that it went missing. Jared tells her they found the book and opens his backpack to show her the book, only to discover it has been replaced and is now missing. Their Aunt and the kids start yelling, which causes Lucinda to be sedated by the hospital staff.

Back at the house, they realize the Brownie has taken the book as his latest prank and while searching for it, they find a map marked by Arthur. The siblings decide to retrace their Uncle's steps in an attempt to learn what happened to him on the day they think he disappeared. Their quest reveals that their Uncle may be alive and the same age as when he left because the Elves can keep people from aging. The Elves want the book from the children and previously wanted the book from Arthur. The fact that their Uncle may be alive and being held hostage by the elves, as well as the dangers that has befallen them since moving to the house, anger Mallory and Simon enough to side with Jared. They decide to keep the book while fighting the creatures of the fantastical world.

More summaries and resources for teaching or studying Lucinda's Secret.