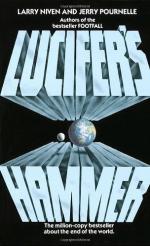 Tim Hamner arrives at a party thrown by Julia and George Sutter to announce that a comet he discovered has been authenticated and named the Hamner-Brown Comet. The "Brown" is a youngster who reported his own sighting about the same time. Tim explains that he found it first but waited for some time to be certain that it really was a comet before making the report.

Also at this party is Harvey Randall and his wife, Loretta. Harvey is a documentary film maker and is looking for his next project, which will turn out to be the Hamner-Brown comet. Senator Arthur Jellison and his daughter, Maureen, also attend.

At the San Joaquin Nuclear Power Plant, Barry Price is heavily buried under paperwork. He says that if he'd wanted to handle all this legal paper, he'd have been...

(read more from the Prologue through June; Three Summary)