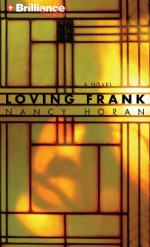 Nancy Horan
This Study Guide consists of approximately 75 pages of chapter summaries, quotes, character analysis, themes, and more - everything you need to sharpen your knowledge of Loving Frank: A Novel.

Nature is important to the architecture of Frank Lloyd Wright. He designs his buildings to capture nature and bring the outdoors indoors and the indoors outdoors. To him nature is religion.

The Nineteenth Century Woman's Club is where Mamah reconnects with Frank Lloyd Wright after he finishes she and Edwin's house. He is giving a talk and she goes to see him. Mamah also gives a talk to the club on the women's roles in Taming of the Shrew. The Club is a way of bringing woman together to have an educational discussion.

Divorce is seen by Mamah and Frank as freedom. Edwin is reluctant to give Mamah a divorce at first, so she plans to stay away for two years so that he will have to give her a divorce or grounds of desertion. Catherine will not give Frank a...

More summaries and resources for teaching or studying Loving Frank: A Novel.