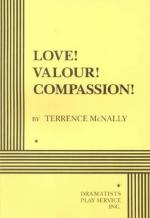 Terrence McNally
This Study Guide consists of approximately 43 pages of chapter summaries, quotes, character analysis, themes, and more - everything you need to sharpen your knowledge of Love! Valour! Compassion!.

When McNally's Love! Valour! Compassion! opened Off-Broadway at the Manhattan Theatre Club in 1994, it was greeted warmly by its reviewers, who predicted it would quickly transfer to Broadway and be the splash of the following season. It did, and it was, earning McNally the Tony Award for Best Play in 1995 (one of four Tony Awards he netted between 1990 and 1997). Those who praised the play applauded its profound, evocative themes, its masterful dialogue, and its depiction of gay characters as ordinary people facing both ordinary and extraordinary problems.

In the Nation, David Kaufman observed:

What's difficult to convey in any discussion of Love! Valour! Compassion! is the grace with which the characters become real people as their stories unfold. It's not only that they're vividly rendered, but that they're revealed gradually, in a layered and richly textured fashion.

In Backstage, reviewer David Sheward noted that through the...

Love! Valour! Compassion! from Gale. ©2005-2006 Thomson Gale, a part of the Thomson Corporation. All rights reserved.