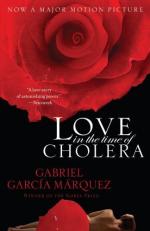 Love in the Time of Cholera Summary & Study Guide

Gabriel García Márquez
This Study Guide consists of approximately 32 pages of chapter summaries, quotes, character analysis, themes, and more - everything you need to sharpen your knowledge of Love in the Time of Cholera.

Love in the Time of Cholera Summary & Study Guide Description

Love in the Time of Cholera Summary & Study Guide includes comprehensive information and analysis to help you understand the book. This study guide contains the following sections:

This detailed literature summary also contains Topics for Discussion on Love in the Time of Cholera by Gabriel García Márquez.

“Love in the Time of Cholera” is a 1985 Spanish-language novel written by Nobel-prize winning author Gabriel García Márquez. Edith Grossman translated the book into English in 1987. The novel explores the power that love has over lives, often comparing the symptoms of love to illness – specifically, to cholera. Gabriel García Márquez weaves a story that spans over 50 years and involves several lives in order to highlight the aspects of human nature that are universal like love, sexual desire and aging.

The novel begins with the death of a minor character, but the event quickly introduces the major characters of the book. Dr. Juvenal Urbino arrives at the home of his chess-playing friend Jeremiah Saint-Amour who has just been declared dead. Within a few days, mourners arrive at the home of Juvenal to grieve the doctor’s death after he falls from a ladder while attempting to retrieve a parrot from a mango tree. After his funeral, his wife Fermina is confronted by an elderly man named Florentino Ariza who confesses his love for her. She is angry, presumably at his timing, and kicks him out. From there, readers learn that the brief encounter after the funeral was one over 50 years in the making, and the story of Fermina and Florentino is told from the beginning.

Florentino is a messenger boy in late teens when he first sees Fermina Daza in the study of her father’s home. She is only thirteen at the time but Florentino is enamored by her beauty and demeanor. He resolves that he will be with Fermina and the two begin several years of secret correspondence. They agree to be married once Fermina is finished with school, but her father finds a trunk full of the letters and takes her out of the country for two years. Florentino finds ways to communicate through telegram messages and the two maintain their plans for marriage. When Fermina returns to her hometown, however, she realizes that she her love for Florentino has been nothing more than an illusion and she breaks off the communication.

Florentino determines that he will be with Fermina, no matter how long he has to wait. Fermina marries Juvenal Urbino and has two children but Florentino does not lose heart. He decides that in order to be the right type of man for Fermina, he must establish an impressive career and he spends years working his way through the ranks of a prominent river shipping company. In order to distract himself from the absence of Fermina in his life, Florentino has over 600 sexual relationships and never once falls in love with the women. Even as Florentino ages, he continues to cling to the hope that he will one day be with Fermina.

When Juvenal Urbino finally dies in his 80s, Florentino takes advantage of the opportunity to confess his love to Fermina again. Though she is first offended, she softens to his advances and the two begin their long delayed relationship. Since both are already in their 70s, the passion between them is virtually non-existent. Theirs is a relationship of companionship and familiarity and though it is not what Florentino had been dreaming about for over half of a century, he is satisfied to finally have Fermina for himself.

More summaries and resources for teaching or studying Love in the Time of Cholera.

Love in the Time of Cholera from BookRags. (c)2022 BookRags, Inc. All rights reserved.