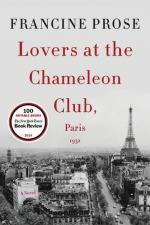 This detailed literature summary also contains Quotes and a Free Quiz on Lovers at the Chameleon Club, Paris 1932 by Francine Prose.

“Lovers at the Chameleon Club, Paris 1932” tells the story of how the lives of numerous different characters intersected in Paris in the 1920s, 1930s, and 1940s.

At the beginning of the novel Gabor Tsenyi is a Hungarian photographer, living in Paris and trying to build a career as an artist. Louisianne “Lou” Villars is a young girl being trained as an athlete elsewhere in France. Lionel Maine is an American writer living in Paris and writing about his experiences of poverty and romance while pursuing his artistic career. Suzanne Dunois (later Suzanne Dunois Tsenyi) is a language teacher living in Paris and the girlfriend of Lionel Maine. The Baroness Lily de Rossignol is a former Hollywood actress married to the heir of a wealthy car manufacturing company who uses her fortune to fund the careers of artists in Paris. Nathalie Dunois is a 21st century high school teacher, writing a biography of Lou Villars.

In Part One, Lou Villars was sent to a convent school by her parents where one of the nuns, Sister Francis, noticed her talent for athletics and helped her train as an athlete. Sister Francis introduced Lou to her brother, Dr. Loomis, and together the three of them traveled the country so that Lou could compete in sporting events. After one such event in Paris, Lou was approached by Gabor Tsenyi who gave her a business card for the Chameleon Club in Paris. After Dr. Loomis attempted to rape Lou, she ran away. She went to the Chameleon Club where the owner, Yvonne, gave Lou a series of jobs which eventually led to Lou appearing onstage as a performer, dressed in men’s clothes. Lou became involved in a romantic relationship with another woman at the Chameleon Club, called Arlette.

Meanwhile, Gabor took photographs of the people of Paris and attracted the interest and attention of the Baroness Lily de Rossignol. Gabor introduced Lily to his friend Lionel and to Lionel’s girlfriend Suzanne. Suzanne left Lionel after falling in love with Gabor. Lily paid for a replica of the Chameleon Club to be built in Gabor’s studio so that he would not need the permission of the club’s owner Yvonne in order to take photographs of the club’s clientele. Gabor took a photograph of Lou Villars with her lover Arlette, which he named “Lovers at the Chameleon Club, Paris 1932”.

In Part Two, Lily recruited Lou to be trained as a racecar driver for the Rossignol car company. Arlette broke up with Lou and began a relationship with the corrupt chief of police, Clovis Chanac. Gabor’s first photography collection became a success. On the cover was the photograph of Lou and Arlette. Driven by jealousy of Arlette’s relationship with Lou, Chanac revoked Lou’s racing license on the grounds that Lou dressed in men’s clothes, which was illegal in France. During the ensuing court case Gabor’s photograph was used as evidence against Lou. Lou was fired from her job as a racecar driver and became a mechanic. She was contacted by a German racecar driver who invited her to watch the Berlin Olympics. Whilst in Germany, Adolf Hitler recruited Lou as a spy. In the run up to the German invasion of France, Lionel went back to America and Lily moved to the South of France.

In Part Three, Gabor and Suzanne escaped Paris and went to live with Lily in the South of France. A few months later, all three of them returned to Paris and Suzanne joined the French Resistance. Lou began working as a mechanic for Jean-Claude Bonnet, the deputy minister of information for the Nazis in Paris. Bonnet was injured and a German spy was killed after the brakes for Bonnet’s car were sabotaged. Lily’s husband was believed to be responsible for the sabotage and was murdered. Lily joined the Resistance. Lou began to work as a torturer at the Gestapo headquarters in Paris. One night Lou, Chanac, Bonnet and some other Germans attended a performance at the Chameleon Club featuring Arlette, the ex-girlfriend of both Lou and Chanac. After Chanac made offensive remarks about Arlette, the owner of the club, Yvonne, demanded that they all leave. Fearing reprisal, members of the Resistance – including Lily and Suzanne - helped Yvonne to escape from France. Suzanne was arrested under suspicion of helping Yvonne escape. Whilst at the Gestapo headquarters, Suzanne was interrogated by Lou. Later, Lou was murdered by members of the Resistance shortly before the Allied invasion of France at the Normandy beaches, which eventually brought about the end of the war.

At the end of the novel, Suzanne writes a letter of complaint about the inaccuracies in Nathalie Dunois’ biography of Lou Villars, in which Nathalie falsely claims to be Suzanne’s niece and fabricates her account of the night Suzanne was interrogated by Lou. Suzanne states that Lou did her best not to hurt Suzanne and injured her in the most minor ways possible. She encouraged Suzanne to scream out and pretend to be in pain for several hours while Lou read a newspaper. Lou told the Gestapo she couldn’t get any information out of her and Suzanne was released.

Sixty years after the events depicted in the novel, an aging Lionel Maine insisted on watching the end of the horror movie “Carrie” over and over again, in which the bloodied hand of the abused protagonist shot up from the grave ready to take revenge against those who had wronged her.