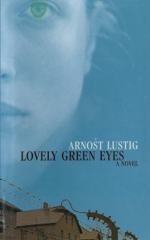 This detailed literature summary also contains Quotes and a Free Quiz on Lovely Green Eyes: A Novel by Arnost Lustig.

Lovely Green Eyes is the story of a 15-year-old Jewish girl, Hanka Kaudersova - known as Skinny, and the 21 days she spends as a feldhure (field prostitute) in the final weeks of World War II. Facing the proposition of being sent to the gas chambers at Auschwitz-Birkenau, she finds her way into a group of girls being considered for the brothel and is selected for a job that leaves her questioning everything she knows.

The novel opens with a description of the brothel, and Skinny's recurrent nightmare, returning her to the entrance to Auschwitz-Birkenau where the soldiers had instructed the women to give their children to their grandmothers and sent them away to the gas chambers. Having thus set the scene, the narrator introduces Skinny and his own relationship to her. She is the girl with whom he fell in love when she was only 16 years old, having survived the horrors of the Nazi occupation and returned to Prague. He is writing the story from the future, when Skinny has become his wife, but most the plot takes place at Feldbordell (field brothel) No. 232 Ost.

The narrator first meets Skinny and her family when they are interred at the Terezin concentration camp together. When the family are sent to Auschwitz-Birkenau, however, he and Skinny are separated and do not meet again until after the war. Upon arriving at Auschwitz-Birkenau, Skinny's younger brother, Ramon is sent to the gas chambers immediately. Her father commits suicide by running at the electrified fence, and her mother, after working in the camp for some time, is selected to also be sent to the gas chambers, leaving Skinny alone in the world. She works as a cleaner for one of the doctors in the camp and, as part of his work, has had her sterilized. When the doctor is sent to the front in disgrace, Skinny is afraid that she too will be sent to the gas chambers, so joins a group of Aryan girls in the doctor's office who are being vetted for their suitability to work in a field brothel, rather than in the camp. She is selected and sent to No. 232 Ost, a field brothel under the management of Oberfuhrer Schimmelpfennig and Madam Kulikowa.

Arriving at the camp a virgin, upwards of 12 soldiers a day pass through Skinny's cubicle. Most of them are unremarkable and Skinny's greatest concern is trying to remain healthy, despite minimal rations, freezing temperatures, and exposure to so much potential disease. On two days, however, Skinny is sent an officer, rather than enlisted men. This means that she spends the entire day with the officer and therefore has some respite. The first officer, Captain Hentschel, is kind to her and makes conversation. He even suggests that he would like to take her to events outside the brothel, and leaves her a warm pullover and some money when he departs. A few days later he sends her a basket of contraband food. The second officer, Obersturmfuhrer Sarazin is the complete opposite. He has a hatred of Jews that prevents him from talking about almost anything else, and takes pleasure in hunting people mercilessly. He forces Skinny to take his gun and point it at him and then orders her to fire. She does not do it.

Through the weeks that Skinny is at the brothel, she forms relationships with the other prostitutes. Estelle, she discovers, is also Jewish, and this creates a greater bond between them. Beautiful has been given a packet of cyanide by one of the soldiers and gives some to Skinny as a precaution. Maria-from-Poznan spouts anti-Semitic rhetoric but Long Legs had a Jewish boyfriend before the war. One by one, the girls disappear. Beautiful takes the cyanide, Ginger is arrested for trying to pass money to people outside the brothel, and Long Legs is shot after a complaint from a soldier. Even Madam Kulikowa is executed on the day that the brothel was to be evacuated in the German retreat.

Luckier than her friends, Skinny escapes from the marching columns during the evacuation and makes her way back to Prague. Once there, she begins the long journey to understand her experience and learn how to live in the world that remains.