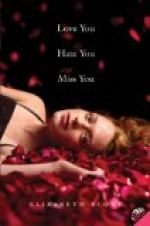 Love You Hate You Miss You Summary & Study Guide

Elizabeth Scott
This Study Guide consists of approximately 23 pages of chapter summaries, quotes, character analysis, themes, and more - everything you need to sharpen your knowledge of Love You Hate You Miss You.

Love You Hate You Miss You Summary & Study Guide Description

Love You Hate You Miss You Summary & Study Guide includes comprehensive information and analysis to help you understand the book. This study guide contains the following sections:

This detailed literature summary also contains Topics for Discussion on Love You Hate You Miss You by Elizabeth Scott.

"Love You Hate You Miss You" by Elizabeth Scott is a young adult novel which focuses on the efforts of sixteen year-old Amy to get over the death of her best friend, Julia.

When the novel begins, Amy is released from Pinewood Rehabilitation Center, having undergone therapy there for a few months following the car accident that claimed the life of Julia, to handle her drinking and Julia's death. Amy is angry, resentful, and sad, because she believes she has killed Julia, and because she believes her parents, Colin and Grace, are only being nice to her because of everything that has happened. Colin and Grace are deeply in love with one another, and never anticipated having children in marriage. Amy is an unexpected surprise, but her parents tell her that they do love her, and that she isn't a burden to them. At the same time, Amy continues meeting with Laurie, her therapist from Pinewood, who encourages her to rethink her relationship with Julia.

Back at school, Amy falls into a group of friends, including Patrick and Caro. As time passes, Amy and Caro begin a tense friendship, but it is one which Amy comes to enjoy. Amy also grows closer to her parents, coming slowly to accept that they really do indeed love her, and that they really do want to be a part of her life. Amy also realizes that she can have a drink without being drunk, but that she has feelings for Patrick as well. She chooses Patrick over drinking, and realizes as well that sex isn't just a casual thing, but that it is an emotional one as well. At the end of the novel, Amy consents to being a stronger person, and says good bye to Julia at last.

More summaries and resources for teaching or studying Love You Hate You Miss You.

Love You Hate You Miss You from Gale. ©2005-2006 Thomson Gale, a part of the Thomson Corporation. All rights reserved.