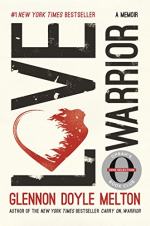 Glennon Doyle Melton
This Study Guide consists of approximately 51 pages of chapter summaries, quotes, character analysis, themes, and more - everything you need to sharpen your knowledge of Love Warrior.

The following version of this book was used to create this guide: Melton, Glennon Doyle. Love Warrior. Flatiron Books, 2016.

Love Warrior, by Glennon Doyle Melton, is a memoir describing Melton’s marriage nearly coming to an end due to infidelity and the road she traveled back to happiness. More than that, it is the story of the way human beings relate to one another based on the roles society has assigned to them.

In the Prelude, Melton describes the day of her wedding to Craig. She is pregnant and her family is in attendance. She hopes being married will make her into a better person.

Part One of the memoir deals with Melton’s life up to the point of her marriage to Craig. Part One, Chapter One goes back to examine Melton’s childhood and the years before her marriage. She knows that she was loved as a baby. She remembers the way other people treated her mother because of her beauty and that at a young age she realized that there are rules that pretty girls are supposed to live by. At age ten, Melton feels ugly and fat. She becomes bulimic and by the age of 13 her parents are desperate to help her.

In middle school, Melton learns to act a certain way to fit in with the other girls and be liked by the boys. She calls this having a representative, whom she says she put forward into the world so that the real her could stay safely inside.

In tenth grade, Melton has sex for the first time. It seems impersonal and like something that happens to her rather than something she participates in.

In her senior year, Melton is admitted to a mental hospital. After high school she goes to college and joins a sorority where the rules are the same as they are in high school. She begins drinking and taking drugs.

In Chapter 2, Melton has graduated from college, but she still drinks every night. She meets Craig and they begin dating. She gets pregnant and has an abortion. After that, she drinks even more heavily and her parents tell her that she must stop or they cannot be a part of her life. They schedule an appointment with a priest for her.

In Chapter 3, Melton goes to the church. There she sees a picture of Mary and feels connected to her. When she talks to the priest she feels like he cannot understand her.

At the beginning of Chapter 4, Melton has been sober for a few weeks, but she eventually lapses back into drinking. She discovers she is pregnant again and believes that God is telling her she is invited back into living and that she is worthy of being a mother. She knows she must get sober, so she calls her sister who takes her to an Alcoholics Anonymous meeting.

Melton tells Craig she is keeping the baby. She moves forward by approaching her sobriety minute to minute and focusing on making the next right choice.

Chapter 5 begins at Melton’s wedding to Craig. After the wedding they go to a hotel and Melton hopes sex will feel different now that she is married. It does not and she thinks she will be lonely forever.

Part Two of Love Warrior takes place from the start of Melton’s marriage to the time point when the marriage breaks down. Part Two, Chapter 6 starts with Melton learning to be a wife by watching commercials with wives in them. She packs Craig’s lunches and decorates their apartment.

Craig and Melton go to the doctor and are told that their baby appears to have Down’s Syndrome. They resolve to love the baby the way he is. When the baby is born, he does not have the condition. They name him Chase.

As Chase grows, Melton feels as though she and Craig are growing apart. She is unable to connect with Craig through conversation and he only wants to connect through sex, which does not work for her. Craig asks her to watch pornography with him, but afterward she feels disgusted and tells him to get all of the pornography out of the house.

Melton and her husband have two daughters, Amma and Tish. She stops working and stays home to raise her children. Motherhood is exhausting and she feels resentful toward Craig.

In Chapter 7, Melton discovers her love of writing and her sister encourages her to keep doing it. She develops an online following which gives her the connection she cannot find with Craig.

Melton contracts Lyme’s disease which prompts the family to move to Naples, Florida where the weather eases her condition.

In Chapter 8, Melton uses the family computer to write and discovers that Craig has downloaded pornography onto it. She is angry and he says he will go to therapy. Melton goes to one of his appointments with Craig and he reveals he has been having sex with other women. Melton tells him to leave. She worries about what a divorce will do to her children.

Chapter 9 starts after Melton’s sister has flown in to help her and Melton has told her children about the separation. Melton vacillates between divorcing Craig and staying with him. Her sister advices her to wait to make a decision.

Melton joins a church, but discovers it is a very patriarchal church when a woman approaches her and tells her that God does not want her to divorce. Instead, she is supposed to help her husband through this difficult time. Melton leaves the church.

Chapter 10 takes place at Christmas time. She tells Craig she is going to file for divorce and he tells her that he will never move on and that he is determined to win her back. He tries to show her he is changing by being helpful with the children and volunteering at a women’s shelter.

Part Three of the memoir deals with Melton’s healing journey. Chapter 11 begins with Melton seeing a therapist. Ann, the therapist, tells her that it is unlikely she will never be in an intimate relationship again, but does not pretend that doing so will be easy.

In Chapter 12, Melton decides to go to a yoga class. She likes the way she does not have to make decisions when she is there and believes her body is teaching her mind something about staying anchored. During a hot yoga class, Melton has an epiphany about the way she has spent her life running from loneliness.

Craig is also seeing the therapist and he tells Melton he wants to practice talking. He takes notes so he will not forget anything Melton tells him.

In Chapter 13, Melton takes a class that teaches her to heal through breathing. The instructor tells the class that all they need to do to be with God is to breathe. Melton has an experience in the class that makes her realize that God loves her and has always loved her. She decides that if she is going to extend grace to other people the way God has given her grace, she cannot exclude anyone, including Craig and the women he slept with. She goes home and tells Craig about the experience because she wants him to know that God has already forgiven him and loves him. However, she tells him her forgiveness will take longer.

Melton thinks about the way religion has always taught her that women are to be helpers for men. She looks up the original word used for women in the Bible and discovers it is ezer, which means warrior.

In Chapter 14, Melton goes to a speaking engagement. Afterward, a woman approaches her and suggests she try a church in Naples that seems like it would be a good fit. Melton and Craig go to the church and feel at home there. Melton begins teaching Sunday School.

Ann advises Melton to try to slowly reconnect with Craig physically. She tells Melton that she must tell Craig how she feels in the moment instead of hiding it. Melton tells Craig that his hugs make her feel trapped, so they practice hugging in a way that feels less demanding to Melton. They go on a date and Melton kisses Craig, but tells him she is not ready for more.

Chapter 15 takes place 18 months after Melton learned of Craig’s infidelity. She watches him coach her children’s soccer teams and feels a little jealous over the way the other women look at her handsome husband. She also realizes that she respects him for staying and working on their marriage.

Melton decides she is ready to have sex with Craig again. She hopes it will be different this time. During sex, she and Craig communicate and when it is over, they both feel different and Melton feels like it was an expression of love.

One day Amma dances around the kitchen acting sexy which prompts a conversation between Melton and her daughters about what sexy means and how being pretty and being beautiful are two different things. She tells them that pretty is defined by the rules of society, but beauty comes from inside.

In the Afterword, Melton and Craig stand on the beach alone and renew their vows.

More summaries and resources for teaching or studying Love Warrior.