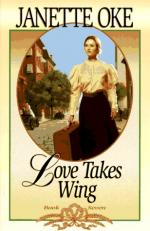 Janette Oke
This Study Guide consists of approximately 44 pages of chapter summaries, quotes, character analysis, themes, and more - everything you need to sharpen your knowledge of Love Takes Wing.

"She knew Marty had been afraid Melissa would be so taken with eastern civilization that she would almost forget her country relatives. But the girl had come back with her teacher's certificate and her genuine love and appreciation of family still intact" (Chapter Two, p. 20).

"One thing for sure was that she was no longer concerned about Melissa being heartbroken if Jackson should choose someone else" (Chapter Two, p. 27).

"She had forgotten most everything about Rand O'Connel. Not that she had ever really noticed him much in the past. He had been just a boy-a fellow student at their small school, neither stupid nor brainy, loud nor shy. He had just been there" (Chapter Three, p. 30-31).

"Belinda gathered from his statement that he had never been fond of farming. She also sensed that there was something else he felt he would enjoy. Whatever it was, he seemed...