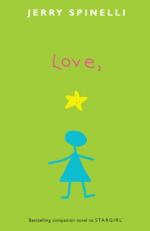 Jerry Spinelli
This Study Guide consists of approximately 31 pages of chapter summaries, quotes, character analysis, themes, and more - everything you need to sharpen your knowledge of Love, Stargirl.

This detailed literature summary also contains Topics for Discussion and a Free Quiz on Love, Stargirl by Jerry Spinelli.

Love, Stargirl is the story of seventeen-year-old Stargirl Caraway's adjustment to her new town after leaving behind her friends in a move to Phoenixville, Pennsylvania for her final year of high school.

At the opening of the novel, it is clear that Stargirl is extremely lonely for her friends back home, particularly her ex-boyfriend, Leo Borlock. The entire novel is comprised of letters written to Leo from Stargirl in the wake of her move. Most of Stargirl's early letters are laced with longing for her life back home as she struggles to assimilate to the new town. Very soon in the novel, however, Stargirl begins to meet the characters that will become her closest friends. This includes Dootsie Pringle, the five-year-old pip who interrupts one of Stargirl's meditation sessions; Charlie, the man who passes his days by his wife's grave; and Perry Deloplane, the thug-turned-love-interest in Stargirl's life. Stargirl passes her days in a variety of ways from "mind washing" or meditating to writing poetry at various locations around town.

Throughout the novel, Stargirl is very connected with nature and her largest project comes when she decides to make a solar calendar similar to the Stonehenge in the woods near her home. Every morning, she wakes at 4:00 am to mark where the first sunbeam of the morning touches the earth. This project is so fascinating that soon, the entire neighborhood is involved, lighting their porch lights so Stargirl can walk through the darkness in safety. At the end of the novel, Stargirl hosts a massive Winter Solstice party. She doesn't think anyone will wake up early enough to attend and is shocked when more people than expected show up. It is clear that Stargirl has made a strong positive impression on the neighborhood and everyone clamors to show her how much they appreciate her individuality.

Stargirl's major personal conflict arises when she realizes that the boy she once found annoying and delinquent - Perry Deloplane - is actually a handsome, fascinating young man. Momentarily, Stargirl is conflicted in her emotions. Is she still in love with Leo even though he lives in Arizona, or his her heart changing? Is she falling for Perry? She struggles to come to grips about her feelings for Perry, but also to figure out the truth behind his tough exterior. Over time, she realizes that Perry is actually a caring, misunderstood young man, but by the time this realization occurs, Stargirl knows that Perry would make a better friend than lover and that her feelings for Leo will never change. At the end of the novel, Stargirl has a stronger grasp on her personal identity, and she has made a town full of new friends to embrace the new woman that she has become.

More summaries and resources for teaching or studying Love, Stargirl.