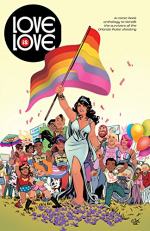 This detailed literature summary also contains Quotes and a Free Quiz on Love Is Love by Various.

The following version of this book was used to create this study guide: Love is Love, by various creators: edited by Sarah Gaydos and Jamie S. Rich. IDW Publishing, 2016.

This book is a collection of visual and textual responses to the shooting at the Pulse nightclub in Florida in June of 2016. The collection consists of single-page or double-page layouts, sometimes with text and sometimes without, and sometimes offering tributes to those killed in the shooting. There are also frequent representations of comic book characters, but most of the comics portray what might be described as everyday people, those who might be referred to as non-super heroes. There are no page numbers in this book: entries in this analysis are identified solely by the order in which they appear in the collection.

The book begins with an introduction from film-maker Patty Jenkins, who describes her reaction to the Pulse shooting in terms of her experience making a film about a woman who, in Jenkins’ opinion, was a victim of the same sort of hatred and discriminatory attitudes that led to the shooting.

At that point, the tributes begin, and continue for roughly 130 pages. They fall into six main categories, but it must be noted there are no formal divisions: comics that might fall into any of the following categories are scattered throughout the collection.

There are several comics that feature super-heroes, comics in which characters like Batman, Superman, and Wonder Woman contemplate the Pulse shooting; the socio-cultural circumstances that defined the context of both the shooter and his victims; and the book’s central thematic consideration, the oft-repeated idea that “love is love.” Of these, perhaps the most notable is a series of pages that include the character of Batwoman, one of the first openly lesbian characters in comic books. A related sub-category has to do with pages that include references to other comic book characters, such as those in the “Archie” series of comic books, or other literary characters, such as those in the “Harry Potter” books.

There are several comics that feature personal stories, mini-memoirs or autobiographies of the creators who recall their reactions to the shooting, or their own history of growing up as members of one or the other of the communities that suffered most in the attack (i.e. the LGBTQ and / or Latinx communities). A third category of comics within the collection features mini-fictions that explore the experience of being in the club; explore thematic, personal, or metaphoric reactions to the shooting; or respond to socio-political issues raised by the shooting, its triggers, and its aftermath. An important sub-category here is defined by a collection of narratives in which children react to the shooting with questions of how it was possible, why those communities were targeted, and where the desire to kill comes from.

There are also the comics that explore the shooting, its causes and its aftermath, from a more purely poetic perspective. These pages contain evocative text and imagery that are more metaphoric and/or symbolic than literal in their explorations. A related category is that which encompasses the purely visual representations of reaction – that is, without narrative. The pages in this category evoke thematic elements such as courage, fear, joy, and the enduring power of love.

Finally, there are several pages that pay individual tribute to those who were killed in the shooting, celebrating their lives and their passing with visuals (portraits) and/or text.