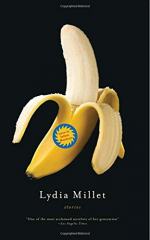 Lydia Millet
This Study Guide consists of approximately 63 pages of chapter summaries, quotes, character analysis, themes, and more - everything you need to sharpen your knowledge of Love in Infant Monkeys.

The pheasant shot by Madonna in Chapter 1 symbolizes the circle of life. Before she shot it, it lived by eating worms. After its death, it would become food for the worms.

Girl, the female lion in "Chapter 2: Girl and the Giraffe" symbolizes desire. Girl desires to eat, so she takes off after a roadside giraffe instead of staying with her brother when he is injured. Joy, another female mentioned in the book, desired to focus her studies on leopards when she tired of lions. She moved to another area to do so, leaving her husband behind to pursue her new desire. Kirsten, only mentioned once by name in "Chapter 2: Girl and the Giraffe" is Juncker's wife. She desired a luxury vacation and took it while Juncker went on his own journey.

In these same instances, Girl may also represent freedom. In all cases, the females...

More summaries and resources for teaching or studying Love in Infant Monkeys.