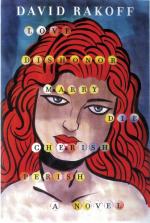 Love, Dishonor, Marry, Die, Cherish, Perish: A Novel was written by David Rakoff. It consists of several short stories penned in rhyming verse. The characters include a cross section of American lives from several decades. While their stories are told separately, from time to time their lives become interwoven.

Chapters 1-2 tell the story of Margaret (who is later called Peg) as a crying, redheaded baby. Her recently widowed nineteen year old mother, who had no plans to take care of a baby by herself, believes that Peg is cursed. The mother, who is never named, treats her daughter unkindly. At school, Peg is taunted and bullied. She leaves school and goes to work in a factory. Just as she begins to gain some self-esteem, she is raped by Frankie, her mother's boyfriend. Since her mother thinks that her sweet, innocent daughter has been flaunting herself at men. she takes Frankie's side. She blames Peg for the ordeal. The family's neighbor, Mrs. Kovacs, helps Peg run away. On a train to Denver, Peg meets a young man named Hiram. He is a gentle soul who gives her food. When the cold is too much for her to bear, he wraps her in his arms and sings to her until she falls asleep. Hiram appears in the next chapter as the father of Clifford.

Chapters 3-5 tell the story of a young boy named Clifford, his mother, his Aunt Sally, and his cousin Helen. Clifford is artistic. He dotes on his mother mostly because she is sad. Hiram, Clifford’s father, has had a stroke and exists somewhere between life and death. Clifford has a difficult life, being taunted and bullied at school. His mother always encourages him in his art and tells him grand stories of her youth.

Chapter 6 gives a deeper look into Clifford's cousin Helen's life. Clifford sees his Aunt Sally and cousin Helen once a year. His aunt is a vivacious woman who seems to have everything go her way. Clifford refers to her as being in full technicolor. Meanwhile, her daughter Helen is much like Clifford in that she is often taunted, sometimes by her own mother who actually means no harm. Clifford and Helen become very close. Although Helen is older, she trusts Clifford’s wisdom. The two play together, discuss books, art, and life. One afternoon Clifford takes a photo of Helen. The photo shows Helen topless with two oranges covering her breasts. Clifford thinks Helen is beautiful and that she looks like Aphrodite. Both cherish the photograph and the memory. The photo is thought of often by both.

In Chapter 7, Clifford has moved to San Francisco. As he settles into the city's gay community, he believes that he has finally found himself. He has words with a lady named Blanche. Blanche calls the activities on Castro Street immoral, obscene, and unnatural. Clifford responds by telling her to look the other way. He is proud of his life and his mate.

In Chapter 8, Susan, a young college graduate, has given up on her lofty dreams about her artistic talent. She is working in an art gallery and receiving an allowance from her father to buy baubles and fine clothes. Susan, her boyfriend Nate, and their mutual friend Josh go away for a week at the ocean. While there, Susan and Josh have an affair. Nate knows about what is going on, but he never tell that to Susan.

In Chapter 9, the story moves forward to the wedding day of Josh and Susan. Nathan decides to toast the newlyweds by telling the tale of a tortoise and scorpion. It's his way of letting Josh and Susan know that he is aware of their affair while Susan was still with him.

In Chapter 10, the novel switches back to Clifford. The AIDS epidemic is underway. Many of Clifford's friends have already died. Others are ill from the disease, including Clifford. Clifford knows that he probably has less than a year to live; but, he looks back on his life without regret.

In Chapter 11, Josh and Susan are living a successful, yet empty, lifestyle. Susan changes her name to Sloan and enters the world of real estate. Her interest is in material things. Josh keeps busy playing tennis and squash. Josh's mother Hannah has Alzheimers. Susan, who thinks only of herself, is annoyed by Hannah

In Chapter 14, the book is brought to a close. Susan has a spiritual awakening. She decides to live life on her own terms, without Josh. Feeling abandoned, Josh moves into a studio apartment. While unpacking he comes across a box marked "Ted's Stuff." The box is filled with items just as Ted had left them on the day he died from a heart attack when Josh was only ten years old. Also, in the box is the picture taken by Clifford of Helen. The picture that was taken 60 years before shows a young girl's hope.