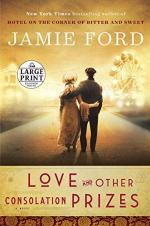 Love and Other Consolation Prizes Summary & Study Guide includes comprehensive information and analysis to help you understand the book. This study guide contains the following sections:

This detailed literature summary also contains Quotes and a Free Quiz on Love and Other Consolation Prizes by Ford, Jamie.

The following version of this book was used to create the guide: Ford, Jamie. Love and Other Consolation Prizes. Penguin Random House, 2017.

In Love and Other Consolation Prizes, Jamie Ford chronicles the life of Ernest Young through chapters that skip between Ernest’s youth and an elderly Ernest. Ernest, the son of a white missionary and a Chinese mother, was born in rural China. As a child, Ernest becomes traumatized after seeing his mother suffocate his baby sister out of desperate poverty in a patriarchal world. After watching his baby sister die, Ernest develops a sympathy for all downtrodden girls and women--a sympathy that persists throughout his life. Ernest’s mother bequeaths a jade pin to Ernest and sends him off to America, where he is promised a better life. However, Ernest is smuggled onto a ship with inhumane conditions. He meets Chinese girls and one Japanese girl, who will be forced into prostitution or sold as indentured servants. The boys on the ship are stuffed into sacks and thrown into the sea by smugglers. All of them drown except for Ernest, who uses his pin to break free of the sack.

After being discovered ashore, Ernest becomes the ward of Ms. Irvine, who places him in a series of schools in which Ernest experiences racism. After expressing the wish to go to a better school, Ernest displeases Ms. Irvine, who raffles him off at the first Seattle’s World’s fair. Madam Flora, the proprietor of a high-class brothel, the Tenderloin, wins Ernest. Madam Flora treats Ernest humanely, giving him his own room and good food, in return for his assistance with menial tasks around the Tenderloin. At the Tenderloin, Ernest meets the Japanese girl from the ship and learns that her name is Fahn. Ernest also meets Maisie, Madam Flora’s daughter, who seems to dislike him, although they end up as friends. Eventually, Ernest falls in love with both Fahn and Maisie, who are both unaware that he is in love with both of them.

Madam Flora begins to suffer from the symptoms of syphilis, and Miss Amber takes advantage of Madam Flora’s mental confusion to sell Maisie to the rich Louis J. Turnbull. Madam Flora and Miss Amber head to Germany for Madam Flora’s medical treatment, but Madam Flora dies in Germany and Miss Amber never returns. Attracted by a life of riches and ease, Maisie agrees to become the ward of Louis J. Turnbull and marries him eventually. When Ernest picks Maisie up from her first night with Louis Turnbull, Ernest meets Turnbull and discovers that he came to America on one of Turnbull’s ships. Ernest discovers the hypocrisy of Turnbull and how he made false promises to Chinese people abroad in order to benefit from human trafficking. Maisie tells Ernest that Turnbull allowed Maisie to bring Ernest along for a trip, but Ernest refuses to become economically dependent on Turnbull.

Fahn runs away when Maisie is sold into high-class prostitution because Fahn assumed that the lives of the “working girls” were glamorous and they had respect. However, Fahn discovers the opposite when she works at the Tangerine for a period of time. When Fahn wants to quit her job, the proprietors of the Tangerine refuse to let Fahn leave, and locks her in her room with poison and a candle, expecting Fahn to commit suicide. However, Fahn burns the Tangerine down. Ernest, on one of his drives, discovers Fahn standing naked in the middle of the street and takes her back to the Tenderloin. When a new mayor of Seattle is elected, the Tenderloin is forced to close down. Ernest keeps a motorcar and makes his living as a chauffeur. Ernest and Fahn stay together and eventually have two children, Juju and Hanny.

More than fifty years later, Juju, who works as a journalist, sees a newspaper clipping about a boy named Ernest who was raffled off in Seattle’s first World’s Fair. Juju asks Ernest if that boy is him, and presses him to tell her the story of his past. Juju triggers painful memories for Ernest, who is also coping with Fahn’s amnesia. Fahn, who is now known as Gracie, can barely remember Ernest. Ernest’s other daughter, Hanny, works as a showgirl in Las Vegas and becomes engaged to Rich, an affluent white lawyer. Eventually, Gracie’s memory starts to return, and she calmly tells Rich at a family dinner that she worked as a prostitute in her youth. Both Juju and Hanny are shocked, but recover from the surprise of learning that their mother used to work as a prostitute. One day, Gracie disappears, leaving Ernest a note that tells him to go to the Space Needle. Ernest heads to the Space Needle in search of Gracie and finds Maisie. Ernest realizes that Gracie thought he loved Maisie and should be with her. Ernest finally finds Gracie at the Japanese Village and asks her to marry him. The novel ends with Ernest, Gracie, and Maisie reunited at Seattle’s second World’s Fair, coming to terms with the past.

Love and Other Consolation Prizes from BookRags. (c)2022 BookRags, Inc. All rights reserved.