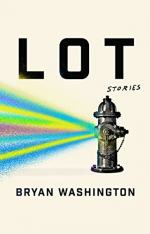 Bryan Washington
This Study Guide consists of approximately 51 pages of chapter summaries, quotes, character analysis, themes, and more - everything you need to sharpen your knowledge of Lot.

This detailed literature summary also contains Quotes and a Free Quiz on Lot by Bryan Washington.

The following version of this book was used to create this study guide: Washington, Bryan. Lot. New York: Riverhead Books, 2019.

Lot is a collection of interlinked short stories set in Houston, half of which revolve around a young man named Nicolás and his family.

In “Lockwood,” Nicolás recalls briefly living next door to a boy named Roberto when he was a young teen, growing up in the East End neighborhood. Roberto's family was poor, and Nicolás' mother tried to help them with food and money, but Nicolás' father forced her to stop. Nicolás and Roberto had a series of sexual encounters, before his family ultimately moved away when they could no longer afford their rent.

In “Alief,” an entire neighborhood looks on as a young woman named Aja enters into an extramarital affair with her neighbor, a white man named James. Aja was an immigrant from Jamaica, where she met her husband Paul. The neighborhood tried to warn Paul he was being cuckolded, but he did not believe them until he came home one day and caught James with his wife. Paul strangled James to death and the police arrested him. When no family came to claim James' body or plan a funeral for him, the neighborhood pooled their money and threw a party in his honor.

In “610 North, 610 West,” Nicolás recalls the increasingly dysfunctional state of his parents' marriage in his teen years, as his father began seeing a mistress, often leaving the family for long stretches of time. He recalls his brother Javi asking his mother why she did not leave him, and getting slapped in response. Once, Nicolás' father took him to his mistress's house. When he returned home, he told Javi the mistress was beautiful and white, because he knew this was the only way Javi could make sense of the betrayal.

In “Shepherd,” a narrator named Chris recalls being visited by his older cousin Gloria from Jamaica when he was a teenager. Gloria had been a sex worker, and had recently had a baby who died shortly after birth. Gloria and Chris bonded over the weeks she stayed with the family, a time in which he also experimented sexually with a male friend. Gloria understood intuitively that Chris was gay, and she tried to help him come to grips with this fact by initiating a sexual encounter. Chris could not maintain an erection, and when Gloria left the next day, he was too embarrassed to say goodbye. She left a book for him with a personalized inscription, but the book was lost and Chris never learned what it said.

In “Wayside,” Nicolás recalls selling drugs with Javi and his friend Rick, and finally feeling like he earned his brother's respect, albeit briefly.

In “Bayou,” a narrator named TeDarus recalls the story of his friend Mix finding a chupacabra. Mix wanted to alert the media, hoping he might get rich and famous, but TeDarus stole the chupacabra to try to impress his girlfriend Denise, who was pregnant with another man's baby. She wanted nothing to do with TeDarus, and ultimately the two men returned the chupacabra to the bayou, where a herd of others emerges from the forest to greet it.

In “Lot,” Nicolás' father left the family permanently, and Javi became a heavy drug user. When their mother kicked him out, he joined the army and died overseas in a car accident. Nicolás' sister Jan got married and rarely visited. This left Nicolás with the responsibility of looking after their mother and helping out in the restaurant she ran. However, Jan convinced their mother to sell the restaurant because the neighborhood was gentrifying. Nicolás recalls the last time he saw his brother, when he told him that he believed he might be gay. Javi slapped him in response.

In “South Congress,” a lonely recent immigrant named Raúl got a job as a driver for a drug dealer named Avery. The two men bonded as the drove the streets of Houston each night, and Avery told Raúl about his son, a student at Texas Tech. He expressed relief that his son was not a drug user, but one night they came across him on the street, clearly strung out. Avery got out of the car and slapped his son. The next night, Avery did not come to work and Raúl never saw him again.

In “Navigation,” Nicolás recalled working at a taqueria, where he met a white man and went home with him. The man asked Nicolás to give him Spanish lessons so he could pursue a promotion at his job. When he ultimately got the promotion and it required a move to Dallas, he asked Nicolás to come with him, but Nicolás declined.

In “Peggy Park,” an unnamed narrator recalls the boys he used to play baseball in his youth, including one who became a pro as an adult.

In “Fannin,” Nicolás' sister Jan recalls seeing her father in the street one night. He was high, and did not respond when she tried to speak to him.

In “Waugh,” a sex worker named Poke lived in an apartment with five other sex workers, including Rod, the man who brought Poke in off the street when he was homeless. Rod told Poke he was HIV+, and asked him not to tell their roommates. Weeks passed and Rod maintained his silence with the rest of the household, and the situation became so tense that Poke started staying with one of his regular clients, a man named Emil. When the other men at the apartment finally realized that Rod was ill, they kicked him out of the house. More weeks passed, and eventually Poke asked Emil if Rod could stay with them. Emil agreed, but when Poke found Rod at a soup kitchen, Rod told him angrily that he was not interested. Poke continued to check on Rod daily, until eventually he was nowhere to be found.

In “Elgin,” Nicolás' mother has moved away to Louisiana and Nicolás is living in his childhood home alone. His friend Miguel criticizes him for using casual sex as a means of distracting himself from his problems. Miguel is an immigrant from Guatemala, and he saves up enough money to send his parents back home, but chooses not to go with them. Miguel and Nicolás bond over their mutual loneliness. They have sex, and Miguel sleeps over, the first time Nicolás has ever actually spent the night with a man. Nicolás drives out to the beach and wonders if it is time to rethink his chronic aversion to commitment and enter into an actual relationship.

More summaries and resources for teaching or studying Lot.