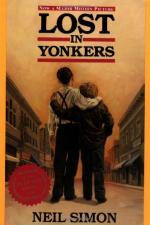 Neil Simon
This Study Guide consists of approximately 22 pages of chapter summaries, quotes, character analysis, themes, and more - everything you need to sharpen your knowledge of Lost in Yonkers.

This detailed literature summary also contains Topics for Discussion on Lost in Yonkers by Neil Simon.

Lost in Yonkers is a Pulitzer Prize-winning play written by legendary stage and screenwriter Neil Simon. It premiered in 1991 and won the Tony Award for Best Play, Best Leading Actress, Best Supporting Actress, and Best Supporting Actor. The story follows Jay Kurnitz, a sixteen-year-old boy living with his grandmother while trying to help raise his younger brother, Arty. His highly dysfunctional family provides little support for Jay. In fact, they all call upon Jay to help them with their own problems and insecurities. Jay, however, forges a bond with his strong-willed grandmother, and he learns to be strong for everyone else.

The play opens with Jay and Arty Kurnitz, two teenage boys, dressed in formal 1940s attire. They are in the living room of their grandmother’s house, which is located above the family’s candy shop, discussing how much they hate being there. Jay says the entire Kurnitz side of their family is disturbed, and it’s their grandmother’s fault. Their father, Eddie, enters through a door a few times. He is visiting his mother in her bedroom. He tells the children to mind their manners and to look presentable for their grandmother. Later, he stays and explains to his children why they are there. Eddie goes into debt when his wife is sick, and he owes a loan shark $9,000. He has decided to leave and work collecting scrap iron for the war effort. Since he will be gone a year, Eddie asks his mother if Jay and Arty can stay with her. Even though Grandma protests, Eddie’s sister, Bella, says yes to Eddie’s request.

Weeks later, Jay and Arty are in their beds reading a letter from their father. Bella comes in from the movies, but Grandma is furious she is coming in so late. Later, Jay and Artie are alone in the house. They notice a black car waiting outside when Bella comes back. She tells them she wants to get married. She has met a man named Johnny, an usher at a movie theater. During this conversation, she tells the boys that Grandma has $15,000 put away somewhere in the candy store below.

Later, the boys are out of bed. Jay is rummaging around downstairs trying to find the $15,000 so he can send some money to his father. A man comes up to them in the dark, and they realize it is their Uncle Louie. He comes into their bedroom and tells them to be careful when trying to steal from Grandma: he never got away with it when he was a child because she notices everything that goes missing. The boys tell Louie a black car and two men have been coming around the house for a while. Louie bribes the boys to tell the men that he isn’t at the house. He informs the boys that he will be staying with them for a while.

When Act Two begins, Arty is sick in bed with a fever. Jay brings up some soup Grandma made. Arty doesn’t want to drink it, but Grandma comes up and forces him to finish the whole bowl. She doesn’t like Arty being sick because he can’t earn his keep. Both he and Jay work for Grandma in the candy shop to pay for their expenses while living with her. Louie tells Arty Grandma doesn’t do mean things to them because she wants to; instead, she is preparing them to fend for themselves. Bella comes upstairs and reveals that she wants to tell her family about marrying Johnny that night. Then the boys ask Louie if they can leave with him. However, he gets upset because they think he is a gangster.

That night, Bella gathers all the members of her family, except for Eddie, into a room to try to tell them her news. When nobody seems supportive, she falters. However, Jay helps her begin talking about marrying Johnny. Her family is appalled by Bella’s disclosure. When Grandma tells Bella she doesn’t want to hear anymore of Bella’s talk, Bella begins to break down. She says her babies would be happy and healthy, unlike herself and her siblings. Grandma still leaves, and Bella has a meltdown.

Bella goes missing for a few days, and Aunt Gert is taking care of Grandma. Bella comes back to talk with Grandma, and the boys leave. Grandma doesn’t think Bella could be a good wife or mother because of her diminished mental capacity. She also doesn’t think Bella can handle the physical aspect of a relationship because Bella would become too attached. But Bella tells her she has done things with men before when she was a teenager. Bella admits the only reason she did those things was because she wanted some sort of affection she never received as a child. Bella says she won’t leave and marry Johnny now, but she wants to get married and have children eventually.

The play skips to nine months later. Jay and Artie are dressed in their formal attire. Their father has returned to take his sons back. Grandma admits she thought about sending him the $9,000 he needed, but she said Eddie needed to work this out for himself. Jay and Artie say goodbye to their grandmother and thank her for teaching them how to be strong. After they leave, Bella tells Grandma she is meeting some friends later. It seems like life is going to be more relaxed now that Bella is acting like an adult.

More summaries and resources for teaching or studying Lost in Yonkers.