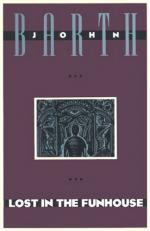 John Barth
This Study Guide consists of approximately 22 pages of chapter summaries, quotes, character analysis, themes, and more - everything you need to sharpen your knowledge of Lost in the Funhouse.

Lost in the Funhouse Summary & Study Guide includes comprehensive information and analysis to help you understand the book. This study guide contains the following sections:

This detailed literature summary also contains Topics for Discussion on Lost in the Funhouse by John Barth.

Lost in the Funhouse is a post-modern collection of short stories published in 1963. John Barth is considered one of the premier American post-modern writers and his fiction has been studied extensively over the past 50 years. The title piece is perhaps the most famous and has become synonymous with the post-modern literary canon. In the introduction to the book, John Barth explains all of the pieces can be read separately, but that the order of the book is laid out in a particular way on purpose and the stories are really meant to be read, or performed, in that order. Barth experimented with different styles of writing based on the style with which he intended for it to be read or performed. Certain stories should be read quietly, on an individual basis, while others are meant to be read aloud, listened to from a recording, or performed by several players.

Each piece is independent of the next, though all the stories affect the others in some way. The character of Ambrose Mensch appears in three chapters and each tale covers a different portion of his childhood. The first story about Ambrose discusses his lack of a name for the first few months of his life. His father is a patient in an insane asylum and his mother has no energy or desire to find a suitable name for him, preferring to just call him “Christine” which was going to be his name if he was a girl. Ambrose is eventually named after a swarm of bees hovers over him and his mother and he is not stung. His uncle remarks that event is similar to that of Saint Ambrose and the name sticks.

In the next tale, Ambrose is in fourth grade and bullied by classmates and kids in the neighborhood. His older brother Peter provides very little protection and when Ambrose is waiting for his brother who is in a secret club meeting with other neighborhood boys, Ambrose finds a message in a bottle. The message ends up being nothing more than a greeting and salutation but Ambrose fantasizes what excitement it might hold before opening it. In the third chapter about Ambrose, he is thirteen and heading to Ocean City, Maryland, to spend the 4th of July holiday with his family. He fantasizes about mutual romantic feelings with his brother’s girlfriend Magda and ends up alone and lost in the funhouse that is meant for lovers.

Several characters from mythology make appearances in the book, including Echo, Menelaus, Helen, Narcissus and Telemachus. In each piece, traditional stories from mythology are retold in a fresh way that pays homage to the original stories. The author makes connections between the contemporary stories of Ambrose Mensch and the ancient stories of mythology, showing human nature and storytelling have not changed much through the centuries.

Other pieces do not have specific characters but address the audience specifically about the author’s feelings as regards contemporary fiction. The author often pauses in mid-thought to point out the literary devices he is employing and how they agree or disagree with conventional fiction writing. Some pieces discuss the meaning and futility of life through the voice of a traveling sperm or a tape recording. As an entire collection, Lost in the Funhouse comments on what the author believes to be overused writing techniques as he gives his own fresh spin on how fiction should be written, read, heard, and performed.

More summaries and resources for teaching or studying Lost in the Funhouse.

Lost in the Funhouse from BookRags. (c)2022 BookRags, Inc. All rights reserved.