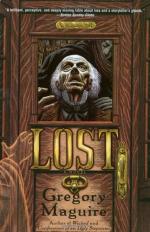 Plot Summary
+Chapters Summary and Analysis
Stave One: Somebody Else in the Vehicle
Stave Two: At the Flat in Weatherall Walk
Save Three: From the Chimney Inside the Chimney
Steve Four: As Dante in the Purgatorio
Stave Five: For the Time Being
Characters
Objects/Places
Themes
Style
Quotes
Topics for Discussion
Order our Lost Study Guide

Gregory Maguire
This Study Guide consists of approximately 41 pages of chapter summaries, quotes, character analysis, themes, and more - everything you need to sharpen your knowledge of Lost.

Gregory Maguire's novel Lost is inspired by Charles Dickens's novel, A Christmas Carol. Lost is a fictional novel about an author orf young adult novels, Winifred Rudge, who travels to London to work on her latest book, but finds far more adventure and self-exploration than she bargained for.

Winifred or Winnie is writing a novel about a young woman named Wendy Pritzke who is haunted by the ghost of Jack the Ripper. Winnie plans to stay with her step-cousin and good friend, John Comester in London while she researches famed Jack the Ripper tourist spots for the novel. Although Winnie proves to be a bit of a curmudgeon who holds most people at arm's length, she clearly views John as her one true friend and is quit excited to see him. When Winnie arrives in London however, John is nowhere to be found.

John lives in the top level of a large house built and owned by their ancestor who is also believed by their family to have been the real life inspiration and model for the Charles Dickinson character, Ebenezer Scrooge. Winnie makes herself at home in John's flat while she waits for him to return, growing increasingly alarmed that something may be wrong. John has hired workers to renovate his kitchen, but Winnie quickly learns that they are frightened by noises and strange occurrences in the walls of John's kitchen, and it is drastically slowing their work. It is not long before Winnie also hears strange noises coming from the chimney behind the kitchen wall and begins witnessing occurrences that seem to have no explanation other than the house is haunted.

While trying to find rational ways to deal with the apparent hauntings of John's flat, Winnie also reaches out to John's friends, neighbor and girlfriend Allegra, and finally John's work colleagues, trying to track him down and assure he is alright. Almost two weeks later, John finally appears in the book, and is not the person that Winnie has portrayed him to be. He seems angry and hostile with Winnie, forcing her to acknowledge some painful memories she has been suppressing as well as face some very tough realizations about herself. Readers follow Winnie through her adventure of facing her ghosts of the past, present, and the future still to come.

More summaries and resources for teaching or studying Lost.