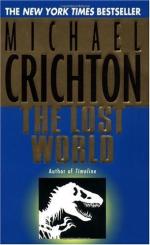 This detailed literature summary also contains Related Titles and a Free Quiz on The Lost World by Michael Crichton.

The Lost World is the second in a series of books by Michael Crichton about the existence of genetically engineered dinosaurs. In Jurassic Park, the prequel to The Lost World, Crichton introduces a company called InGen, which has discovered a way to clone dinosaurs from ancient DNA. In the first book, the arrogant head of InGen, John Hammond, believes he can control his amazing creations. Hammond is so sure of this that he builds a theme park and intends to promote it as a family vacation resort featuring his marvelous, cloned dinosaurs. However, nature proves too powerful for Hammond, and by the end of the first book, the dinosaurs have taken over the theme park and killed their human creators. As a result, InGen orders the destruction of the dinosaurs, and InGen's legal team places a gag order on the scientists who consulted with Hammond on his theme park.

One of these scientists, mathematician Ian Malcolm, is the protagonist of The Lost World. The novel opens approximately five years after the disaster at Jurassic Park. Malcolm still walks with a limp and uses a cane due to a serious injury he sustained in the first novel; however, aside from this, life has returned to normal for Malcolm. Then, rumors begin to spread about strange animal carcasses washing up on the shores of Costa Rica. The original dinosaur park was located on Isla Nublar, one of several small islands located off the Costa Rican coast. Malcolm is alarmed by the thought that some of the dinosaurs have survived. His colleague, a hot-shot young scientist named Richard Levine, hears about the rumors and decides that the islands around Costa Rica may be harboring what is known to scientists as a lost world. The lost world hypothesis is a scientific idea that some dinosaurs may still exist today in an isolated, undeveloped part of the world. Intent on studying this potential lost world, Levine convinces Malcolm to join him on the dangerous expedition.

First, Malcolm and Levine must locate Site B. This site, which they discover is located on Isla Sorna off the Costa Rican coast, houses the secret InGen manufacturing plant where InGen made their dinosaurs five years before. Levine, allowing his eagerness to overcome his common sense, rushes off to Isla Sorna accompanied only by a Costa Rican guide, Diego. Dinosaurs quickly kill Diego, and Levine calls for help over the high-tech satellite phone crafted for him by engineering wizard Jack Thorne. Malcolm, Thorne and Thorne's assistant Eddie rush to Isla Sorna to rescue Levine. Upon their arrival, they save Levine from some angry tyrannosaurs. The arrogant Levine, however, insists he was never in need of rescue. Now that Malcolm and Thorne have arrived with the heavy-duty expedition vehicles that Thorne has customized to handle even the toughest dinosaur, Levine insists they stay and study the animals. To the party's dismay, they find Kelly and Arby, two stowaway children, hiding out in their expedition vehicles. The scientists are now responsible for protecting the lives of these innocents.

Malcolm's friend, field biologist Sarah Harding, joins them on the island, but she is not the only new arrival. A group of unscrupulous scientists from Biosyn Corporation, led by the evil Louis Dodgson, show up with the intent of stealing dinosaur eggs and exploiting the dangerous cloning technology created by InGen. Malcolm's predictions about the dire results of InGen's tampering with nature are once again proved correct as Biosyn's interference contributes to another Jurassic Park-style disaster. As chaos reigns on Isla Sorna, Malcolm's team must use every ounce of human ingenuity at their disposal to save themselves. Ultimately, Sarah Harding's positive attitude and Thorne's practicality prove far more valuable than Malcolm's pessimistic theories when it comes to saving the children and escaping from the lost world.