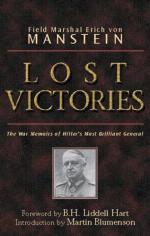 Erich von Manstein
This Study Guide consists of approximately 35 pages of chapter summaries, quotes, character analysis, themes, and more - everything you need to sharpen your knowledge of Lost Victories.

This detailed literature summary also contains Topics for Discussion and a Free Quiz on Lost Victories by Erich von Manstein.

Manstein was a career officer in the German Army and was Chief-of-Staff of Southern Army Group in the invasion of Poland in September 1939. Soon a Polish army was surrounded by the quick German Panzer tank troops and Warsaw was approached. The French declared war but refused to make a serious attack on Germany, and Poland was defeated. After the campaign, the question was how to defeat France and Great Britain quickly. Manstein was concerned that Hitler did not properly give the Armed Forces General Staff or O.K.H. responsibility for formulating a war plan. The O.K.H. did formulate a plan that was like the World War I invasion plan. Manstein suggested that instead German panzer forces be poured into the Ardennes forest region and then turn north and cut off enemy forces in Northern France and Belgium. The plan was adopted and was a complete success in May 1940, with the exception of the British forces evacuation at Dunkirk. Manstein was active in the second phase of the invasion of France, and involved in exercises for the invasion of Great Britain by sea. Manstein felt that Hitler made a great mistake by not trying to invade Great Britain.

Manstein headed the 56 Panzer Corps which invaded the Soviet Union in June 1941 on the Northern Front. Manstein led the corps in seizing a key bridge nearly 200 miles behind the front. Yet later, because of overly cautious tactics, the assault on Leningrad was stalled by September. During mid-September, Manstein was sent to conquer the Crimea in the south and led the Eleventh Army. Manstein captured the entire Crimea except Sevastopol, with its heavy fortifications and mountainous country. In late December, Manstein was stopped from taking Sevastopol when large Soviet forces landed at Kerch. Manstein himself nearly was killed by a Soviet air attack while on a boat reconnaissance of Sevastopol. Sevastopol was only taken in July 1942 after extensive fighting against Soviet landings at Kerch and Manstein was promoted to Field Marshall.

Manstein was sent north to conquer Leningrad, but instead his forces got tied up in a battle around Lake Ladoga. As Manstein rose in rank, he got to see Hitler more and saw that Hitler made battle plans that lacked a proper center of gravity and therefore were doomed to fail. This lack of focus and an overreaching for objectives led to the surrounding of the Sixth Army by the enemy at Stalingrad in November 1942. Manstein was sent to lead Army Group Don in the south to try to relieve the Sixth Army and stop the Soviets from totally destroying the German southern part of the front. Hitler demanded that the Sixth Army hold onto Stalingrad so it was impossible to relieve or have the army break out and the Sixth Army was destroyed by February 1943. Manstein desperately created a new German Southern front as the Romanian, Hungarian and Italian Armies all flee the Russians. He was able to keep the position at Rostov open so that the bulk of German armies stuck in the Caucasus region were able to retreat. For the long term, Manstein saw that the main threat to the German was on their northern flank of the now named Southern Army Group he led. Manstein managed to make a counterattack at Kharkov in March 1943 that destroyed large Soviet forces. Operation Citadel followed in July, but was stopped by Hitler after Western forces landed in Italy. Manstein managed to defeat the Soviets/Russians in a string of small mobile defensive engagements, but lacked the number of tanks and reserves to win any large battles. Hitler caused German defeats by his obsession with retaining economic sites such as the Crimea, the Kuban and Nikopol. By November 1943 a strong Soviet attack in the Kiev area hit the northern flank of the Southern Army Group with disastrous results. German armies were surrounded but saved at Cherkassy, though their equipment was destroyed. In March 1944, there were a series of dramatic confrontations between Manstein and Hitler where Hitler demanded that German forces stop retreating. Manstein countered that German troops had to shorten their line in the South, be mobile, and prevent the First Panzer Army from being encircled. Manstein got his way and the First Panzer Army was saved, but Hitler cannot bear the strain of being contradicted. Manstein was relieved of his command by Hitler shortly after.

More summaries and resources for teaching or studying Lost Victories.