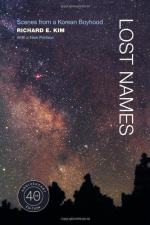 Plot Summary
+Chapters Summary and Analysis
Crossing
Homecoming
Once upon aTime, on a Sunday
Lost Names
An Empire for Rubber Balls
Is Someone Dying?
In the Making of History - Together
Free Quiz
Characters
Objects/Places
Themes
Style
Quotes
Topics for Discussion
Order our Lost Names: Scenes from a Korean Boyhood Study Guide

Richard E. Kim
This Study Guide consists of approximately 35 pages of chapter summaries, quotes, character analysis, themes, and more - everything you need to sharpen your knowledge of Lost Names.

This detailed literature summary also contains Topics for Discussion and a Free Quiz on Lost Names: Scenes from a Korean Boyhood by Richard E. Kim.

This quasi-historical non-fictional novel, published in 1970, occurs between 1932 and 1945 and presents the growth and development of a thirteen year-old boy through his eyes. The reader is immediately drawn into the family circle where he or she grows sympathetic to the boy and his nuclear and extended family. The simple straightforward language of Lost Names makes the work easily understood and presents a reality appreciated even beyond the tragic environment of a world at war. Richard E. Kim, the author of Lost Names, was born in Hamheung, North Korea. Kim entered the United States in 1955, after he served from 1950-1954 in the Republic of Korea Marines and Army. He is a naturalized U.S. citizen who attended several American universities from 1955 to 1963.

Kim was born in 1932 and grew up in Korea as a boy like the one in Lost Names. Although the work is not strictly autobiographical, according to the author, most readers accept "that the young boy, the first-person narrator, is the author himself." Kim wrote a series of seven fictional tales about a Korean boy perceived and classified ironically as a non-fictional account of his life. Kim claims autobiography is neither pure non-fiction nor is pure fiction. He leaves it up to the reader to evaluate Lost Names as whatever they would like it to be since, he writes, it was written for them. This 198-page quasi non-fiction book is comprised of seven unnumbered but titled chapters ranging from 17seventeen to thirty-seven pages. Each chapter is a vignette, or short literary sketch or description, of an event in the boy's life. Each episode reflects a significant experience in the boy's growth from infancy to teenage. Kim writes in simple language as a young Korean boy would. Each word or phrase is packed with what a young boy might feel. For example, on the day they lost their names he walks home in snow thinking over, "my new name, my old name, my true name, my not-true name?" The child finally says "I am going to lose my name; I am going to lose my name; we are all going to lose our names.""

Each chapter title expresses the content of the chapter so the reader is forewarned about what can be expected. For example, the opening chapter discussing the trek from Korea into Manchuria is titled "Crossing." The episode dealing with their name change from Korean to Japanese is succinctly titled "Lost Names." Chapter episodes skip over less significant intervening years. Except for minor characters, the important people in the story have no names but the generic familial identifying roles like father, mother and grandmother. This literary peculiarity enhances their significance by universalizing them to all Koreans and perhaps beyond to any race of people disenfranchised by an occupying force. Paradoxically, this depersonalization makes them more endearing. The poignancy of having no given name is made more devastating by the loss of their ancestral family name as well. This personal destruction is the goal of an occupying race but the father's choice of Iwamoto anchored the ancestral family's "Foundation of Rock" to start anew.

More summaries and resources for teaching or studying Lost Names: Scenes from a Korean Boyhood.