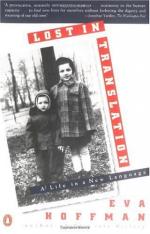 Lost in Translation: A Life in a New Language Themes

Eva Hoffman
This Study Guide consists of approximately 24 pages of chapter summaries, quotes, character analysis, themes, and more - everything you need to sharpen your knowledge of Lost in Translation.

Anti-Semitism is the practice of prejudice toward the Jewish people. It can take place in the many forms from ethnic slurs to personal attacks. The most famous incident involving anti-Semitism was the Holocaust in which Adolf Hitler that murdered millions of Jews claiming that they were inferior to the master race.

According to Eva Hoffman, "Anti-Semitism is a darkness of the mind, a prejudice-rather than a deviation from moral principles."

Hoffman also refers to anti-Semitism as barbaric stupidity, and asked that makes her feel superior. Even those who wouldn't consider themselves to be prejudice often have many false views of the Jews and ignorance of their culture angers the Wydras.

Kaufman learns early on that it is important to affirm her Jewishness with her head held high. To be a Jew means to defy barbaric and dark feelings. By defining the ceilings, a Jew is able to uphold...

More summaries and resources for teaching or studying Lost in Translation: A Life in a New Language.

Lost in Translation: A Life in a New Language from BookRags. (c)2023 BookRags, Inc. All rights reserved.