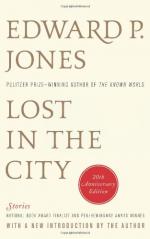 +Chapters Summary and Analysis
The Girl Who Raised Pigeons
The First Day
The Night Rhonda Ferguson Was Killed
Young Lions
The Store
An Orange Line Train to Ballston and The Sunday Following Mother's Day
Lost in the City and His Mother's House
A Butterfly on F Street and Gospel
A New Man, A Dark Night, and Marie
Free Quiz
Characters
Objects/Places
Themes
Style
Quotes
Topics for Discussion
Order our Lost in the City: Stories Study Guide

Lost in the City: Stories Topics for Discussion

Edward P. Jones
This Study Guide consists of approximately 36 pages of chapter summaries, quotes, character analysis, themes, and more - everything you need to sharpen your knowledge of Lost in the City.

In The Girl Who Raised Pigeons are the pigeons just birds? Do the symbols represent something else? What do they represent?

The First Day suggests that an illiterate mother wants her child to attend a particular school. What reasons are suggested in the narrative for the mother's selection of schools?

Cassandra, in The Night Rhonda Ferguson Was Killed, is nicknamed Mack Truck. Based on this nickname, how do you picture her in your mind?

The Store tells the story of the development of the narrator and protagonist as he works in a grocery store over the course of several years. What is the name of the protagonist?

In An Orange Line Train to Ballston a single mother finds a man attractive and wants him to initiate some type of relationship. The man does not respond. Do you think the man knew the woman wanted...

More summaries and resources for teaching or studying Lost in the City: Stories.

Lost in the City: Stories from BookRags. (c)2021 BookRags, Inc. All rights reserved.