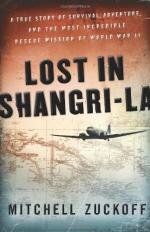 Lost in Shangri-La: A True Story of Survival, Adventure, and the Most Incredible Rescue Mission of World War II Summary & Study Guide

Lost in Shangri-La: A True Story of Survival, Adventure, and the Most Incredible Rescue Mission of World War II Summary & Study Guide Description

Lost in Shangri-La: A True Story of Survival, Adventure, and the Most Incredible Rescue Mission of World War II Summary & Study Guide includes comprehensive information and analysis to help you understand the book. This study guide contains the following sections:

This detailed literature summary also contains Topics for Discussion and a Free Quiz on Lost in Shangri-La: A True Story of Survival, Adventure, and the Most Incredible Rescue Mission of World War II by Mitchell Zuckoff.

Lost in Shangri-La is a non-fiction book by writer Mitchell Zuckoff. This book tells the overlooked story of a plane crash on the Dutch island of New Guinea in the final months of World War II. Twenty-four people went on a Mother's Day sightseeing trip over the lost valley that had been dubbed Shangri-La, including nine WACs, several officers and a group of enlisted men. The plane crashed and three people survived, including a twin whose brother was lost in the crash, a beautiful WAC, and an enlisted man with severe head injuries. Lost in Shangri-La is the story of these three survivors and the brave paratroopers who dropped into the valley to save them amidst the perils of the jungle, the unknown element of the natives, the danger of nearby Japanese soldiers, and the understanding that the military had no clue how to get them out.

In May of 1944, Colonel Ray T. Elsmore was flying a mission over the island of Dutch New Guinea. This mission took Elsmore over the center of the island where his co-pilot pointed out a large valley he had discovered some time before during his own reconnaissance flight. The valley was large and appeared to contain dozens of native villages as well as several thousand natives who appeared untouched by the passing of time. The natives had small farms with fields of sweet potatoes that boasted primitive irrigation systems. The valley, that Elsmore and his co-pilot dubbed Hidden Valley, was fascinating because of the inaccessibility of it and the wonder of the natives who populated it. In a short time, the press got hold of the discovery and wanted to see it. Two reporters who flew over the valley that spring dubbed it Shangri-La after the utopia in the James Hilton novel Lost Horizon.

In short time, flying over Shangri-La became a favorite pastime of the soldiers stationed on the island. For this reason, Colonel Peter Prossen, the chief of maintenance of the Far East Air Service Command, thought it would help build morale to take a group of soldiers, including members of the WACs, or Women's Army Corp, on a tour of Shangri-La. On the afternoon of Mother's Day, May 13, 1945, Prossen loaded his C-47 airplane with twenty-three people. During the flight, which would take forty-five minutes to reach the valley, Prossen left the pilot's seat and joined his soldiers in the fuselage of the plane. Flying the plane was his relatively inexperienced co-pilot, Major George Nicholson.

As the plane passed over a smaller valley outside of Shangri-La, Nicholson took the plane low over the valley floor. Nicholson spotted a mountain ridge directly in front of them covered by clouds. Too late, Nicholson attempted to gain altitude, but pilot error or a downdraft made it impossible for the C-47 to gain altitude quickly enough. The plane crashed into the side of the mountain. WAC Corporal Margaret Hastings, Lieutenant John McCollom, Tech Sergeant Kenneth Decker, Private Eleanor Hanna, and Sergeant Laura Besley survived the crash. However, Hanna and Besley would die within twenty-four hours.

The three survivors, under the guidance of McCollom, made their way down to a clearing he saw from a tree at the crash site in hopes of being spotted by rescue planes. Moments after entering the clearing, the three were spotted. Within a day they received medical supplies and food from the rescue planes. However, Margaret and Decker were so injured that they could not walk anymore. Under the command of Elsmore, a group of officers and enlisted men struggled to find a way to rescue the survivors out of the dense jungle. While they pondered the problem, they sent a group of paratroopers commanded by Captain C. Earl Walter Jr. into the valley to treat the survivors injuries and escort them into Shangri-La where they hoped they would be able to rescue them. It would take six weeks for the military to find a way onto the valley floor, six weeks in which the survivors and paratroopers would have to deal with the dangers of the valley and the curiosity and hostility of the natives, before the military finally found a way to send gliders into the valley and rescue the survivors.