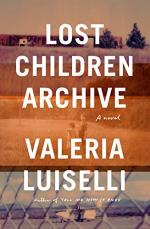 Related Topics
Tell Me How It Ends: An Essay in 40 Questions
The Story of My Teeth

Valeria Luiselli
This Study Guide consists of approximately 45 pages of chapter summaries, quotes, character analysis, themes, and more - everything you need to sharpen your knowledge of Lost Children Archive.

The following version of this book was used to create the guide: Luiselli, Valeria. Lost Children Archive. Alfred A. Knopf, 2019.

Lost Children Archive maps the physical journey of a family from New York City to Arizona. The husband and wife, both documentarians, work on two separate projects over the course of the trip and the novel. Their 10-year-old later begins his own project in the documentation of their family's travels.

The husband and wife originally meet while working on a soundscape project documenting the hundreds of languages that comprise the people of New York City. After a fast romance they fall in love, marry, and join their families together into one. The wife has a daughter from her first husband; the husband has a son from his first marriage to his now-deceased wife. The four live together in relative harmony until the end of the soundscape project. As the couple's career goals and interests begin to diverge, so too does their emotional connection and their ability to communicate. When the husband becomes absorbed by a new project documenting an inventory of echoes about Geronimo and the Apache peoples, he tells his wife he must move to Arizona indefinitely to be closer to the subject matter of his work. Around the same time, the wife starts working with her friend Manuela to deliver her two girls from a detention camp and return them safely to their mother. This peripheral work eventually grows into a larger project, through which she hopes to document the voices of all lost refugee children, particularly those involved in the immigrant border crisis.

The family sets out to Arizona all together, each of them aware that end of the trip will mark the end of their life as a family unit. In their travels, the family makes many stops, visiting a range of towns and historical sites the couple believes will illuminate the subjects and intents of their projects. Throughout these experiences, the wife works through a litany of political, personal, and psychic concerns. She is desperate to capture the story she is tracing, desperate to find Manuela's girls, to convey the truth of contemporary reality to her children while protecting them from it, plagued by the implications of her devolving marriage.

In the second half of the novel, the point of view shifts from the mother to that of her son. The boy directs his narrative passages to his younger sister. His pages are an enactment of his own attempt to document the truth of their trip as an archive of remembrance he can later give the girl. Oftentimes he retells the same experiences and sites from his mother's narrative in the first part of the novel. He also acts as a translator for his sister, often conveying her stories and games to his parents in a way they will understand.

One day while listening to his parents fight in the car, the boy realizes that their family will no longer be together after they reach Arizona. He becomes even more desperate to preserve the best parts of the journey on his sister's behalf. Not long after, while the rest of his family sleeps in a rented cabin, the boy rifles through his mother's things. On one of her maps, he believes he has found the place where Manuela's girls are located. He concocts a plan to venture out onto the Continental Divide Trail with his sister and find them. He leaves a map and a note for their parents in the car. In the morning the two children sneak out of the house and begin their adventure. It is not long before they become lost. The boy tries to comfort and guide his sister, while realizing he has no idea what he is doing or where they are going. After several days of wandering the siblings become separated. The boy wakes up on a moving train, terrified, but finds his sister elsewhere on the car shortly thereafter.

Once they reach Bowie, they jump off the train and wander even further into the desert, hoping to find Echo Canyon where they told their parents they would meet them. They wander for an indistinguishable amount of time through the expanse, encountering other lost children along the way. Eventually they do locate the canyon. By shouting their names inside the canyon, they eventually hear their parents' shouting theirs back, the echoes reverberating across the rocky space.

The final section of the narrative exists as the boy's last recorded document for his sister, detailing his love for her and a promise that they will someday be reunited.