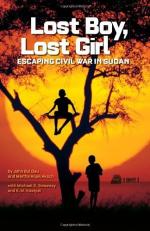 By the time Abraham and John reached Pinyudu, many others joined them. They were the lucky ones, although they didn't feel lucky. There were over a quarter million refugees from the Civil War in Pinyudu and three other camps in Ethiopia in 1988. Those were the survivors. Others died along the way from animal attacks, thirst, hunger, and disease. Both John and Martha arrived at the camp in the same year, but they didn't meet each other until much later.

Almost all of the survivors were boys as young as three or four as well as male teenagers. Most of the older men became soldiers or were killed in battle. The woman and girls were captured and raped or enslaved. Only a few hundred females actually reached Ethiopia.

At this point, the world hadn't really noticed...