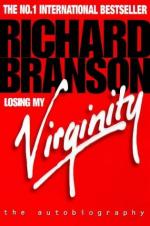 Richard Branson
This Study Guide consists of approximately 37 pages of chapter summaries, quotes, character analysis, themes, and more - everything you need to sharpen your knowledge of Losing My Virginity.

Marrakech is the name of the location of the balloon launch in 1997.

Atlas Mountains is the name of a mountain range in Algeria. Richard flies over the Atlas Mountains in the 1997 Virgin balloon flight just before aborting the flight and landing in the Sahara Desert.

Virgin Group is the name of the holding company that owns the related Virgin business interests. Richard comes upon the name when they advertise and sell cheap mail-order records through the Student magazine. He tells the story that one of the girls working there says they are virgins at business. Another one of the girls adds there aren't many virgins left around here. Richard agrees and announces: "It's Virgin." Virgin Mail Order Records is the name of the record business that results from the first Student advertisement that draws "more cash than we had ever seen before." Other...

More summaries and resources for teaching or studying Losing My Virginity: The Autobiography.

Losing My Virginity: The Autobiography from BookRags. (c)2022 BookRags, Inc. All rights reserved.