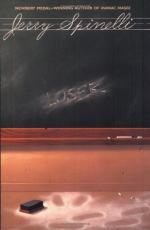 Jerry Spinelli
This Study Guide consists of approximately 38 pages of chapter summaries, quotes, character analysis, themes, and more - everything you need to sharpen your knowledge of Loser.

This detailed literature summary also contains Topics for Discussion and a Free Quiz on Loser by Jerry Spinelli.

Loser, by Jerry Spinelli, follows the life throughout grade school of a boy named Donald Zinkoff, who has a hard time achieving success in anything he does, yet proves to be very successful at being a good person. Spinelli has written a number of children's books and is a winner of the Newbery Medal, one of the most prestigious awards given for children's literature. In this 2003 novel, he portrays a boy whose physical awkwardness and lack of aptitude for schoolwork gradually isolate him from his peers. However, the boy never loses what is most significant such as his love of life, his self-respect, and his desire to help others. Zinkoff, as he is called through most of the book, is a cheerful and loving boy who is so thrilled to be in first grade when the book opens that he can hardly stop shouting and laughing with glee. This exuberance immediately sets him apart from the other children, but they are too young to judge or scorn him for not being like them. Zinkoff is gloriously unaware that he is unusual. All the way through third grade, he maintains an almost unblemished joy in life and openness to relationships with people of all ages. Unfortunately, only a few adults seem to understand and appreciate his special nature and among other children his age, he makes virtually no friends. His father, mother, and younger sister are all very supportive but the boy next door and another boy in school whom Zinkoff attempts to befriend reject his advances.

During fourth and fifth grade, Zinkoff's good humor is severely tested as his classmates become more observant of others and more critical than when they were just starting grade school. When he gets his only "A" in a test during all his years at elementary school, the other children praise him endlessly, and he does not realize they are mocking him. After he fares terribly during a major school sports day, the others start calling him "loser," although not to his face and he remains half-unaware of the name. He joins the band but is also bad at playing music. He finds solace from the growing pressures of school in Willow Street near his home, where he once went with his father, a mailman. An old lady there speaks to him, as does the young mother of a small child named Claudia. Such everyday decencies carry great weight for Zinkoff. In sixth grade, when he enters a big Middle School, he goes beyond "loser" to being invisible or a nobody. During the first snowstorm of winter, the little girl, Claudia, runs away and is lost. Zinkoff hears about this and goes on a long, solo trek in the freezing weather, searching for her. He becomes disoriented and almost dies of exposure, only to discover later that Claudia had been quickly found in good health. This final failure, among a long string of failures, touches all the adults, especially Claudia's mother. By being true to himself, Zinkoff has become a hero even though the clueless kids at school still think of him as a nobody.

More summaries and resources for teaching or studying Loser.