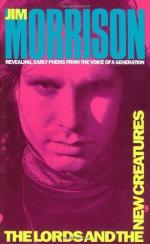 "The Lords and New Creatures" by poet, musician and lyricist Jim Morrison is an in depth look into Morrison's experiences as an observer of human kind and social conditions.

James Douglas Morrison was a student of film before he became involved in music. The poet was formed early in Morrison and the first meeting with future band mate Ray Manzarek kindled an instant bond over lyrics. Morrison went on to throw himself fully into the role of musician, lyricist, poet and unabashed sex symbol. Morrison's deep connection with spirituality colored much of his work, as did the experiences with drugs and alcohol. Morrison was a voice of a generation, one that lingers even more than it might have except for the mysterious circumstances surrounding his alleged death in 1971.

Morrison is known for exploring society's "underbelly," tapping into people and places that might go unnoticed by the average observer. Although Morrison grew up in a middle class home, the poet seems to have some fascination with the seedier side of life. It is not a perverse fascination nor is it tinged with judgment. It is simply an exploration of the sights and sounds of the places Morrison has traveled. Most of the focus remains on Los Angeles and surrounding areas.

In this work, Morrison continues to celebrate some of his main themes, including sex, death, deification, and the great unwashed. There are several poems that contain the cerebral and behavioral differences between men and women, both ancient and modern. Times have changed greatly in the separation of the sexes. The line is not as clear as it once was; rather, women tend to have gained a great deal in the way of respectability and power as well as the opportunity to engage in many activities which were once forbidden. One example of this is the poem in which Morrison discusses how puppet and shadow plays were the impetus and precursor to film and animation. The plays were not tailored toward women, as many believe but toward the men. In the early days of the theater, women were not permitted to attend. After it became acceptable for women to attend the shadow plays there were still restrictions regarding the access to the performance. Women were permitted to see the show on one side of the screen while the men were permitted to view the play from either side of the screen.

There is also a sense of sadness in Morrison about the direction in which society is headed, sacrificing the primal and free flowing existence for the controlled and often stilted lifestyles of the day. The author also spends a great deal of time investigating and analyzing the various stages of cinema and photography, another of the poet's passions.

The poet believes heavily in spirit and divinity, and refers to the topics often. Morrison believed that he was possessed by a great Indian spirit and that each person has within oneself the ability to tap into divinity and absolute knowledge, casting off the mortal trappings and necessities.