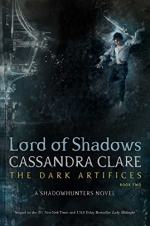 Cassandra Clare
This Study Guide consists of approximately 71 pages of chapter summaries, quotes, character analysis, themes, and more - everything you need to sharpen your knowledge of Lord of Shadows.

This detailed literature summary also contains Quotes and a Free Quiz on Lord of Shadows by Cassandra Clare.

Emma and Julian are two Shadowhunters who are battling with their feelings for each other. They are formally connected as parabatai, which means that they will be there for each other for life. The pledge comes with restraints, including a law forbidding them from having romantic love for each other. Emma and Julian know the secret reason for the law – that romantic love will enhance their powers to the point that they go mad, destroying themselves and their families in the process. They try to fight their feelings but come up with a plan for Emma to go into exile in the hope that the time apart will lessen their parabatai connection, leaving them free to love each other. Before they can launch this plan, the family faces other problems, including the death of the Inquisitor, who was going to enact Emma's exile.

Julian has four full siblings – Livvy, Ty, Dru, and Tavvy – and two half-siblings – Mark and Helen. Mark and Helen have been in exile because they are half-Shadowhunter and half-faerie, and the current Shadowhunter government has a ban on any relationship with faeries. The faeries have set Mark free, with some conditions. He is secretly living with his family. Meanwhile, Christopher Herondale has recently learned he is a Shadowhunter and now lives at the Los Angeles Institute with Julian's family.

One of Julian's ancestors, Annabel Blackthorn, was killed because she was in love with a warlock, Malcolm Fade. Using the Black Book of Death, Malcolm has brought Annabel back to life, but she kills him within minutes of being resurrected. In faerie land, the Unseelie king is making an attempt at greater power. He has discovered how to create places where the magic of the Shadowhunters, including their weapons and runes, does not work. Warlocks begin to fall ill, including one of Julian and Emma's closest allies, Magnus Bane. Julian and Emma wind up in the faerie court where the Seelie queen pledges to keep the Black Book from being used again and promises to join forces with the Shadowhunters to bring an end to the wicked rule of the Unseelie faerie king. Julian and Emma, Mark, their friend Christina, and the family set out to find the book. The wicked faerie king sends faerie riders to get the book. Emma kills one – the first that has ever been killed in the history of the riders. They wind up in a ferocious battle before escaping to Idris, the capital of the Shadowhunter government.

There are political maneuverings taking place at the same time. Zara Dearborn and her followers want to take control of the Los Angeles Institute and implement strict rules on Downworlders. The rules would impact creatures who is not a Shadowhunter, such as a werewolves, warlocks, and faeries. Zara claims to have killed Malcolm, but Annabel swears under oath that she killed him. Annabel's personality transforms dramatically during her testimony, and she attacks the Inquisitor, killing him instantly. A fight breaks out, and Julian's sister (Livvy) is killed, just as the Unseelie King's faeries grab Annabel and take her away. Annabel is carrying the Black Book when she disappears, leaving the hall at Idris in chaos.

More summaries and resources for teaching or studying Lord of Shadows .