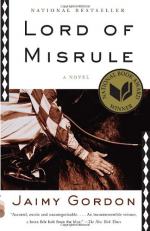 Jaimy Gordon
This Study Guide consists of approximately 82 pages of chapter summaries, quotes, character analysis, themes, and more - everything you need to sharpen your knowledge of Lord of Misrule.

This detailed literature summary also contains Quotes and a Free Quiz on Lord of Misrule by Jaimy Gordon .

Tommy Hansel and his girlfriend Margaret “Maggie” Koderer got more than they bargained for when they decided to take their horses to Indian Mound Downs in hopes of making quick money. In the novel “The Lord of Misrule” by Jaimy Gordon, Maggie realized the racetrack life was more dangerous than she could have ever imagined. This story is both humorous and serious, and is filled with unique, lively characters both of the human and equine varieties.

Seasoned horse owner Deucey recognized right away that Maggie and her boyfriend were trying to make money when she showed up unannounced at Indian Mound Downs asking for four stalls. Tommy and Maggie’s bad luck began the first night they were there when Tommy’s horse the Mahdi was claimed by Gus Zeno, another owner. Also having bad luck that night was Medicine Ed, an elderly black groom who worked for Zeno. He believed he would win big if he bet on Boll Weevil, the horse Gus was running in a race against Hansel’s horse the Mahdi in that first race. Boll Weevil won the race but Zeno died as he was bragging about the horse he’d claimed. Although he won money on the race, Medicine Ed lost the employer who had been so good to him. Medicine Ed was suspicious of Tommy and Maggie but agreed to work for them after they arranged for him to keep the Winnebago that Zeno had given Medicine Ed as a home.

The story deepens when Two-Tie, an elderly racetrack gangster, learned that his niece had come to Indian Mound Downs. He didn’t want her to know about him but asked the stall manager at the racetrack to look out for her. Meanwhile Two-Tie asked Vernon to set up a special race for a horse named The Lord of Misrule, a horse owned by the son of his former girlfriend. About the same time Deucey, Medicine Ed and Maggie decided to buy Little Spinoza a horse that Joe Dale Bigg, the main trainer at the track, was trying to get rid of. Spinoza had a reputation as being a crazy horse who sometimes refused to run in races. The first race in which they ran Spinoza was disastrous but they entered him in a second race which he won. At the end of this race Nkem realized that Joe Dale would retaliate against Deucey and Maggie because he thought they arranged to win the race in order to humiliate him.

To make matters worse for Maggie and Tommy, Joe Dale took a sexual interest in Maggie. He claimed Pelter, the horse Maggie loved, so he would have a way to lure Maggie to his farm. Both Two-Tie and Tommy Hansel showed up at Joe Dale’s farm to rescue Maggie and get Pelter back. Two-Tie was especially angry because he had ordered that Pelter not be claimed. Because Tommy hit both Joe Dale and Biggy, Joe Dale’s son, during the confrontation Two-Tie knew that there would be more trouble coming.

The story reaches a climax when Pelter won the race that was arranged specifically for the Lord of Misrule to win. In the course of the race Mahdi bumped the Lord of Misrule causing him to fall. Little Spinoza was also caught up in the fall out and broke his leg. With those three horses down, Pelter won easily. In the winners circle Maggie knew Joe Dale was angry with her. She was worried she’d be killed or worse. In hopes of saving her horse Maggie signed Pelter over to Medicine Ed. She left the stables and walked toward the river arriving at an abandoned race track. She found Little Spinoza’s body where it had been left in preparation for the knacker to pick him up. As she was saying goodbye to the horse she heard Joe Dale’s voice telling her how much he hated her. He told her he intended to have sex with her. Joe Dale didn’t get his wish because Tommy interrupted him. He beat Joe Dale with a pitchfork and then hit Joe Dale with a car, throwing Joe Dale’s dead body onto an old hot walking machine.

More summaries and resources for teaching or studying Lord of Misrule.