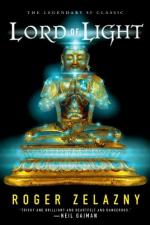 Roger Zelazny
This Study Guide consists of approximately 37 pages of chapter summaries, quotes, character analysis, themes, and more - everything you need to sharpen your knowledge of Lord of Light.

"Lord of Light" is a science fiction novel that takes place on a planet that has been inhabited by people from Earth for many generations. The first settlers of the planet have developed technology that allows them to magnify their mental powers and transfer souls into new bodies. They have used this technology to create a mythology based on the Hindu religion, positioning themselves as gods with unique powers and keeping the majority of the inhabitants of the planet in a state of technological ignorance. The gods live in a domed city called Heaven and are led by the gods Brahma, Vishnu, and Shiva.

Among "the First," as they are called, is a man called Sam, which is short for Mahasamatman. Sam has the power to control electromagnetic forces and was instrumental in capturing the powerful but bodiless inhabitants of the planet when the first colonists arrived. Sam resists the pressure from the other colonists to become a god himself and isolates himself in a large estate. After several years, he emerges from his isolation to obtain a new body and begins a campaign to overthrow the gods by introducing Buddhism as a non-violent alternative to the Hindu mythology. Sam also is an "accelerationist" who wants to allow technology to develop among the people of the planet.

Sam raises an army of followers and releases the aliens that had been held in captivity since he had first defeated them. However the gods are able to capture Sam using their advanced technology. He is taken to Heaven and executed as an example to anyone else who would challenge the gods. Sam does not die, however, as his soul has been strengthened after having been possessed by Taraka, the leader of the aliens. He transfers to the body of a demigod and escapes Heaven with the help of the god Kubera and the goddess Ratri.

With the help of the death god Yama, whose personal conflict with Brahma leads him to join forces with him, Sam engages in an epic battle against the gods. He is once again captured, but many of the gods have been killed and their hold over the world has been weakened. As punishment, Sam's soul is transmitted into "Nirvana" in the form of electromagnetic energy that circles the planet. Several decades later, Yama retrieves Sam's soul from Nirvana and gives him a new body. Along with the goddess Ratri, the three of them once again plot to fight the gods, this time joining with Brahma to battle against Nirriti, a Christian enemy of the gods, in exchange for promises that the gods will allow technology to develop. Brahma, Sam, and Yama are apparently killed in the final battle, but Yama does not die and there are hints that the souls of Brahma and Sam also live on.

More summaries and resources for teaching or studying Lord of Light.

Lord of Light from Gale. ©2005-2006 Thomson Gale, a part of the Thomson Corporation. All rights reserved.