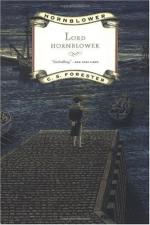 C. S. Forester
This Study Guide consists of approximately 51 pages of chapter summaries, quotes, character analysis, themes, and more - everything you need to sharpen your knowledge of Lord Hornblower.

This detailed literature summary also contains Topics for Discussion and a Free Quiz on Lord Hornblower by C. S. Forester.

Captain Horatio Hornblower is dispatched to quell a mutiny. After successfully capturing the mutinous ship, he learns of an opportunity to foster a local anti-Napoleon rebellion in France. He throws his strength behind the revolt and sees the thing successfully accomplished. Appointed mayor of the rebellious city, he organizes a successful aggressive defense. However, it sadly results in the death of his long-time friend and associate, Captain William Bush. Upon the fall of Napoleon, Hornblower becomes estranged from his wife Barbara. As she travels to Vienna, Hornblower travels to the French home of his old friend the Comte de Graçay. There, Hornblower recommences a sexual relationship with Marie, the Comte's widowed daughter-in-law. This awkward situation persists until Napoleon regains power, whereupon Hornblower and his compatriots become fugitives. They fight a losing guerrilla action for several weeks before they are captured, with Marie being killed in the final confrontation. Hornblower and the Comte face a morning firing squad but are saved from death by news of Napoleon's catastrophic defeat at Waterloo.

The narrative is somewhat disjointed and consists of a series of fairly unconnected episodes in which Hornblower always plays the dominant role. The opening action finds Hornblower attending church during a time of idle pursuits. He is commanded to seek out a mutinous brig and bring in the ship and such crew as can be captured. The mutinous crew has contacted England's enemy, France, and arranged a tentative surrender. Hornblower intervenes and, through deception, causes the French to reject the defection of the English mutineers. Shortly thereafter, Hornblower captures the mutinous ship, personally killing the ringleader of the mutiny. As part of the ship-to-ship combat, probably the most exciting passage in the novel, Hornblower also makes a prize of a French gunboat. The first episode of the narrative thus concludes with Hornblower succeeding beyond all reasonable expectations.

The second major episode in the novel begins when, among the captured French, Hornblower meets one Lebrun, a rising star in the socio-political power base of Le Havre, the nearby French port. Lebrun indicates that Le Havre is ready to denounce Napoleon and declare for King Louis XVIII. In exchange, the city would expect commerce privileges with English trade as well as some measure of British military support. Hornblower realizes the strategic advantage of such a major defection and wholeheartedly supports the rebellion of Le Havre. Largely through bold bluster, he gains the harbor and establishes a strong English naval presence there. Napoleon moves to capture the city, but Hornblower makes an offensive surprise attack which destroys the French siege train; unfortunately, Hornblower's particular friend William Bush is killed in the combat. At this point in time, Napoleon's influence sags and his military options wane, and the Le Havre-centered rebellion expands. Then news arrives of Napoleon's defeat and abdication. Hornblower is made a Baron of the United Kingdom for his service even as his personal relationship with Barbara, his wife, falls apart.

The third major episode in the novel begins when Barbara travels to Vienna for an extended stay and Hornblower returns to England. Quickly bored, he returns to France and seeks solace in the arms of a former lover, Marie. This brief interlude is terminated by Napoleon's return to power. Thus, the fourth major episode in the novel sees Hornblower as the military genius behind a disintegrating guerrilla action, which succeeds insofar as it pins down many of Napoleon's soldiers. Eventually, Hornblower is captured and faces a firing squad, only to be saved from execution by news of Napoleon's disastrous defeat at Waterloo.

More summaries and resources for teaching or studying Lord Hornblower.