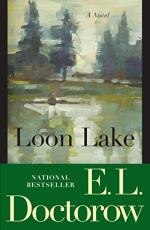 E. L. Doctorow
This Study Guide consists of approximately 34 pages of chapter summaries, quotes, character analysis, themes, and more - everything you need to sharpen your knowledge of Loon Lake.

NOTE: Due to the structure of this novel, page numbers are indicated rather than chapter titles. The following version of this book was used to create this study guide: Doctorow, E.L. Loon Lake. New York: Plume, 1996.

The novel opens in Paterson, New Jersey in the 1930s. Joseph Korzeniowski is the teenage son of two mill workers. Joseph despises his parents and their strict adherence to routine. After graduating high school in 1936, Joseph goes to New York City. He lives in a rooming house and works as a delivery boy. He eventually decides to leave the city to seek other adventures. He works as a manual laborer for a traveling carnival, and he has an affair with the wife of one of the proprietors. He eventually leaves the carnival and continues to wander, eventually coming to Loon Lake, New York, a small town in the Adirondack Mountains. He stumbles upon the large Loon Lake estate of F.W. Bennett, a millionaire manufacturing tycoon.

The Bennett estate allows Joseph to stay on the estate as long as Joseph performs manual labor to earn his keep. Joseph befriends Warren Penfield, a failed poet who has been allowed to live on the Bennett estate for the past seven years. Warren served in World War I before living in Japan for several years. He wallows in his failures as a poet as well as in his failures to ever form lasting, meaningful relationships in his life. Joseph becomes obsessed with a young woman named Clara who is about his age. She is the ex-girlfriend of a powerful gangster—and associate of F.W. Bennett—named Thomas Crapo, and she is now having a sexual affair with F.W. Bennett. When Bennett’s wife—famous aviator Lucinda Bennett—returns to the estate, Joseph and Clara steal a car from Bennett and flee together, driving west.

Joseph and Clara run out of money and arrive in the town of Jacksontown, Indiana. Coincidentally, the town’s main industry is a manufacturing plant owned by F.W. Bennett. Joseph begins to work at the plant, and he and Clara reside in an apartment in town. They befriend the neighboring couple: Lyle James and his wife Sandy. Lyle is a member of the local union. However, Joseph soon discovers that Lyle is actually a covert operative working for Crapo Industrial Services (CIS), which is the company owned by Clara’s ex-boyfriend, gangster Thomas Crapo. Bennett has apparently hired CIS to help suppress union activity. Lyle is killed on the street one night, and Joseph soon deduces that CIS perpetrated the attack in order to make it appear that the union had committed the murder.

Clara soon reunites with Thomas Crapo and leaves Joseph. Joseph then begins traveling west with Sandy, as they have decided to start a new life together. However, Joseph soon learns that Warren and Lucinda have apparently died during a small craft airplane flight somewhere over the Pacific Ocean. Joseph leaves Sandy in the care of a church and returns to Loon Lake, where he finds a grieving F.W. Bennett. Joseph and Bennett grow close, and Bennett eventually adopts Joseph. The novel ends with a timeline of Joseph’s life, which reveals that he experienced much success due to his close association with Bennett.

More summaries and resources for teaching or studying Loon Lake.