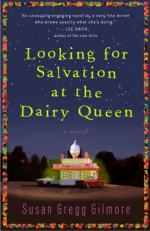 Looking For Salvation at the Dairy Queen Summary & Study Guide

Susan Gregg Gilmore
This Study Guide consists of approximately 47 pages of chapter summaries, quotes, character analysis, themes, and more - everything you need to sharpen your knowledge of Looking For Salvation at the Dairy Queen.

Looking For Salvation at the Dairy Queen Summary & Study Guide includes comprehensive information and analysis to help you understand the book. This study guide contains the following sections:

This detailed literature summary also contains Quotes and a Free Quiz on Looking For Salvation at the Dairy Queen by Susan Gregg Gilmore.

"Looking for Salvation at the Dairy Queen" is a lighthearted, humorous novel that confronts some deep issues like faith, forgiveness, and judgment.

Catherine Grace Cline is a young girl growing up in small town Ringgold, Georgia, a real life town just south of Chattanooga, Tennessee and a few hours north of Atlanta. As the story opens, she is an adult, looking back on her childhood. The young girl’s life is characterized by the loss of her mother at age six; she is raised with her sister by her fiery preacher father, Marshall Cline. The death of Lena Mae Cline leaves a hole in Catherine Grace, a hole she fills with a ‘dream’ of one day leaving the stifling, closed-minded confines of Ringgold making her way south to Atlanta, The Promised Land. She and her sister, Martha Ann, take a weekly trip to the town’s Dairy Queen, where they eat a Dilly Bar and dream of a future away from Ringgold.

The early part of the story is told in flashbacks. Catherine Grace grows up feeling different from her neighbors because she doesn’t have a mother, and this feeling of otherness fuels her tunnel vision to leave town. At age nine she begins to make and sell strawberry jam from the strawberry patch her grandfather started a generation ago; with the money she earns she dreams of her move to the city.

As she grows into her teen years she becomes closer to her neighbor, Gloria Jean Graves, who was a friend to the girls’s mother and serves as a sort of mother to them herself. Their father does have a sort of beau in the form of Miss Raines, the local elementary school teacher, a lovely young woman who clearly loves the preacher. However, he repeatedly tells his girls that he and Miss Raines can ever only be good friends.

Catherine Grace’s dream of leaving town on her eighteenth birthday is temporarily challenged by a short relationship with the best looking, most popular boy in town, Hank Blankenship. Her love for him surprises her, as does his love for her. They date for over a year, and he presents a real problem for Catherine. However, on the night of her senior prom, she finds a reason to break it off with him, feeling like she isn’t right for him.

When Catherine turns 18 she leaves Ringgold on a Greyhound bus bound for Atlanta. Her father is willing to let her go only because he thinks she will be back once she gets it out of her system. The young girl leaves behind a host of people who love her dearly. When she reaches Atlanta she is both shocked and delighted at the differences the city presents. She temporarily lives with a cousin in the city, but eventually finds a room to let in a large mansion in Buckhead. The owner of the mansion is an older woman named Miss Mabie; she and her maid Flora become surrogate family for Catherine in the new city.

Her dream seems to be on track for a while. For six months she lives in Atlanta and saves money from her dream job at Davison’s department store. Her employer lures her in with half promises of promotions and manager training. She works in the gourmet foods department—a lovely irony to her childhood sale of strawberry jam—and hurts her family by staying to work during the holidays rather than returning home.

The dream comes to a halt when, just after Christmas, she receives word that her father has suddenly passed away. In a state of shock she goes home, driven by Miss Mabie and Flora, and finds the town itself in shock at their loss. The town is gripped in gossip and judgment as well, as Miss Raines has recently been found to be pregnant, and Reverend Cline was rumored to be the father. Catherine can’t immediately deal with that rumor, as she is covered in grief when she arrives. The day after coming home she meets a strange woman at Gloria Jean’s house, who says she is her mother, Lena Mae Cline.

Catherine spends a day steeped in rage and anger. She refuses to speak to her mother, who apparently ran away and allowed people to think she had drowned in the creek. Finding herself a young wife and mother of two, she wanted to follow her own dream of being a country singer, and Reverend Cline wouldn’t stand for it, so she left.

After speaking to Miss Raines and learning that the rumors surrounding her pregnancy are true, Catherine confused about her mother and father, and takes out her rage on her family. Only when she finds herself at Dairy Queen do things finally start to make sense. The Dairy Queen’s faithful attendant, Eddie Franklin, fixes Catherine Grace a Dilly Bar and eventually takes her to task, urging her to open her eyes and see the town and its people for the love and comfort to her that they are. Furthermore, he tells her to stop judging her parents for their mistakes; understand that they are just regular people, and all people are capable of making bad choices. It is up to the people of the world to extend kindness to help people through their blunders.

Catherine returns home and spends hours talking to her mother. The next morning, she gives the eulogy at her father’s funeral, making no excuses for either her father’s conduct with Miss Raines or her mother’s conduct. Instead, she urges the townspeople to try to cover their neighbor’s mistakes with kindness and forgiveness, rather than choke out the good in people with malice and gossip.

After the funeral, Miss Raines moves in with them. Catherine decides that her dream was always right in front of her, and makes her home in Ringgold with a bustling strawberry jam business.

More summaries and resources for teaching or studying Looking For Salvation at the Dairy Queen.

Looking For Salvation at the Dairy Queen from BookRags. (c)2022 BookRags, Inc. All rights reserved.