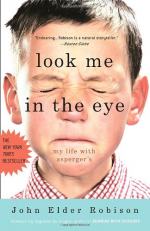 Look Me in the Eye: My Life with Asperger's Topics for Discussion

What is Asperger's Syndrome? How does it differ from a diagnosis of autism?

What conditions did John's parents suffer from? How was John and his brother mistreated by their parents? How might their abuse have impacted John's condition?

What socially unacceptable behaviors did John display? Why was it difficult for him to understand why people didn't react well to him?

What helped John become more socially adept? How did that help him in his career?

Why was John fearful about his son when he was first born? What behavior did he exhibit about his infant that was abnormal?

What does the phrase "savant-like" mean? What kept John from becoming a savant? How is being savant-like associated with...