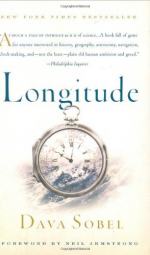 Longitude: The True Story of a Lone Genius Who Solved the Greatest Scientific Problem of His Time Summary & Study Guide

Dava Sobel
This Study Guide consists of approximately 25 pages of chapter summaries, quotes, character analysis, themes, and more - everything you need to sharpen your knowledge of Longitude.

Longitude: The True Story of a Lone Genius Who Solved the Greatest Scientific Problem of His Time Summary & Study Guide Description

Longitude: The True Story of a Lone Genius Who Solved the Greatest Scientific Problem of His Time Summary & Study Guide includes comprehensive information and analysis to help you understand the book. This study guide contains the following sections:

This detailed literature summary also contains Topics for Discussion and a Free Quiz on Longitude: The True Story of a Lone Genius Who Solved the Greatest Scientific Problem of His Time by Dava Sobel.

Longitude is the story of English clockmaker John Harrison and how he figured out how to track longitude, or the east-west position of ships. The problem of longitude was long regarded as unsolvable. At sea, there were no landmarks by which one's east-west position could be tracked. Since ships were in motion, the position of the sun would also not suffice. Calculations by moon were impracticable and could only be used at night. All the clocks that existed were too unreliable, often keeping time at very different rates depending on temperature.

Without longitudinal calculations, many ships became lost. During long voyages, calculating one's distance became nearly impossible to gauge with serious accuracy. Discovering the "secret of the longitude" was therefore a great goal for any ship's captain and for any country with business, military or commercial, on the high seas. The British legislature set up a Board of Longitude which had the authority to offer an award to anyone who could solve the problem. The book is about John Harrison's long, bedeviled question to built an incredibly accurate time-piece that could resist the vagaries of the sea.

There are two major conflicts in this book. The first is between John Harrison's ability and his perfectionism. Harrison builds four clocks before he is satisfied enough to believe he deserves the full prize of the Board of Longitude. He spends several decades of his life constructing these clocks. The second conflict is between Harrison and his arch rival, Royal Astronomer Nevil Maskelyne. Maskelyne, like most astronomers, aimed to discover a lunar solution to the longitude problem. He had what one might term an astronomer's bias, which holds that the only solution worthy of the longitude problem could be solved by someone with the elite education of an astronomer, not a country watchmaker. This causes him to be extremely hostile to Harrison claiming the prize, fighting him until Harrison's death. The book ends by drawing out the influence of Harrison's contribution, showing that it leads to dramatic improvements for sailors around the world.

The major theme of the book is the extraordinary and surprising sources of excellence. Harrison is an uneducated, idiosyncratic English countryman, yet he solved a problem that even Isaac Newton had not. It is also the story of the pettiness of the jealous, particularly embodied in the bitter Nevil Maskelyne. Many are threatened by the greatness of others, particularly if that greatness threatens one's status. This leads to the standard historical phenomenon of hostility to persons of great creativity and inventiveness.

More summaries and resources for teaching or studying Longitude: The True Story of a Lone Genius Who Solved the Greatest Scientific Problem of His Time.

Longitude: The True Story of a Lone Genius Who Solved the Greatest Scientific Problem of His Time from BookRags. (c)2022 BookRags, Inc. All rights reserved.